Traveling on a bicycle makes you susceptible to encounters that are nothing short of serendipitous… and perhaps even a bit unusual. One of these encounters in Salt Lake City really drove this point home for us.

As we were making our way into the big city on I-80, we saw a car pulled over in the shoulder, with smoke coming out from under the hood. We stopped to see if there was anything we could do to help, not that we could offer much. I mean, we were already the sheepish-looking pair riding around with two trailers bungeed together – we were probably better off asking the guy if he had a spare trailer tire in his trunk. 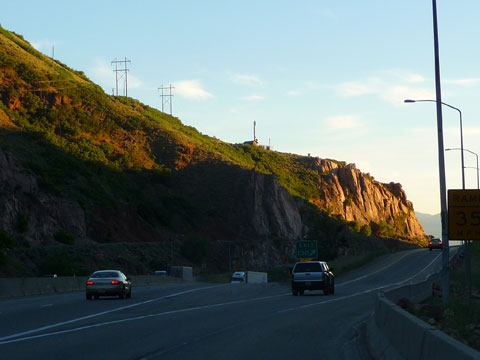 Not expecting much along I-80

The man at the wheel pardoned us from our civic duty, and immediately changed the subject from his smokey vehicle to us. “Where are you guys going?” he asked. “San Francisco,” we replied. He looked stunned. “Wow! Really? Where did you come from?” “New York,” we replied. “That is so cool!” he said with enthusiasm that was a definite 10, if there was such a thing as an enthusiasm 1 through 10 scale, 10 being the highest of course. We smiled, thanked him, wished him luck with his car and went off on our merry way.

Later that evening, Boris got a call from a Salt Lake City area code. “Boris?” the voice on the other line said. “Did you make it to Salt Lake City?” “Yes, we did…” Boris said confused, “but, who’s this?”

“It’s Calvin, the guy you met on the side of I-80…Do you guys want to grab dinner this weekend? It’s on me!” When Boris relayed the news, we both puzzled over how Calvin found our website, Boris’ number and why he was so enthused about buying us dinner. Either way we agreed to meet him. After all, we’re not ones to pass up interesting social opportunities, and tasty Thai dinners.

It turned out that meeting Calvin was one of the highlights of our trip. First of all he was quite the conversationalist. We talked about everything imaginable during our two-hour dinner date – from Artificial Intelligence, to social ethics, and of course bikes. That latter topic somehow always seems to come up. It seemed astounding that we could maintain a non-stop captivating dialogue with a person whom we formerly knew nothing about – except that his car broke down on I-80.

The best thing about Calvin was his exuberance for creative ideas, like going on a cross-country electric bike trip for instance. His enthusiasm for our trip was so contagious, that it even made us doubly excited about the whole thing.

We’ve had other random, but memorable encounters similar to the one with Calvin — like the Russian semi-truck driver who offered to let us spend the night in his cab and a couple on the C&O Canal Trail who treated us to dinner in Pittsburgh.

These are the interactions that remind us why we go on trips like this in the first place. By embarking on a journey such as ours, or any unique travel trip, you throw yourself into the hands of chance. This  means you might be lucky enough to meet kind, interesting people, through very unexpected means.

So, we encourage you all to travel in interesting ways. This doesn’t mean go on a 2-month cross-country electric bike tour. It means do something original, go to a lesser-traveled destination, take a month-long holiday. You can even take a mini-two-day bike tour if you wish. You’ll be surprised at how your unique travel style will attract others. And I promise, you’ll meet people you’ll never forget.