Day #54
Miles Covered Since Medicine Bow, WY: 257
Hours on The Road: Too many!
Miles Traveled Since Beginning: 2,753
Where We Are: Lyman, WY

It’s hard to believe that it’s been 4 days since the last Road Brief!

We should be back on our daily posting schedule from now on, but first – allow us to take a quick step back and share how the last few days have turned out and why the writing has been so sparse.

Turn for the worse.

As we reported from Medicine Bow on May 26th, we’ve gotten pretty lucky in the first 2 days of riding through Wyoming. With a nice tailwind behind us, we were covering distance quickly and without much effort. But, as expected, it couldn’t last and it didn’t.

On days 3, the gods of wind have turned and the most difficult stretch of the entire cross-country journey has begun. The moment we got on the road in the morning, we were greeted by 30+ mph winds that were blowing directly at us.

The wind was unrelenting. The sheer force of it would rob us of any momentum we would generate and actually push us backwards if we ever stopped. Even on the down hills, it would require a conscious effort to move forward. 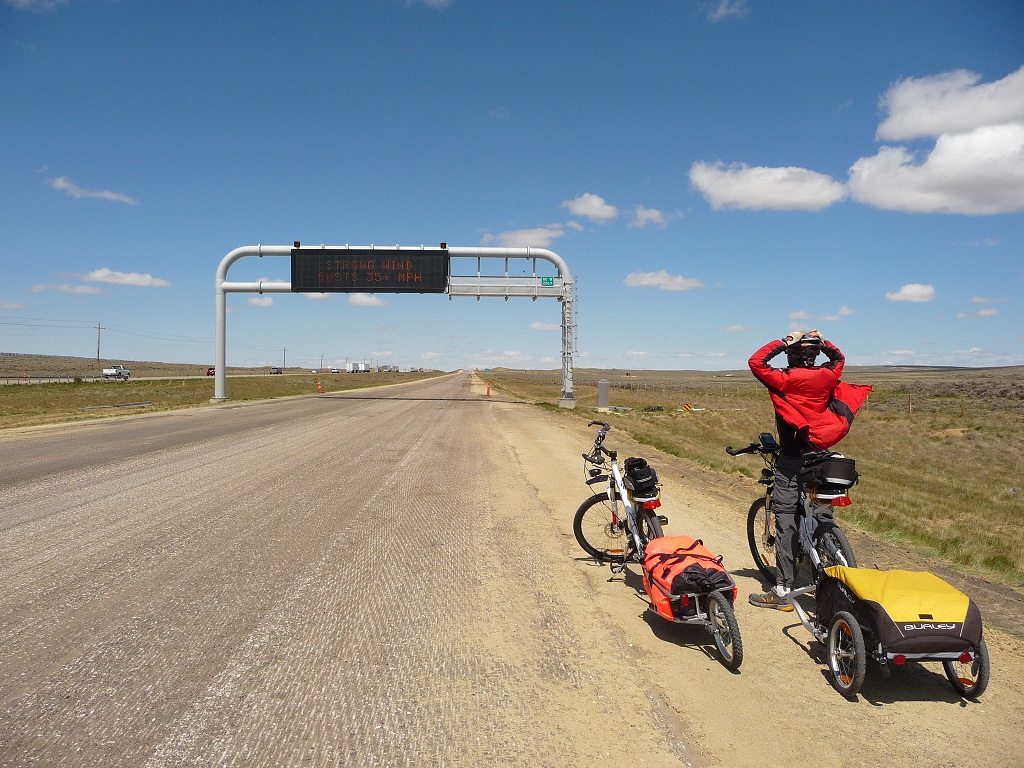 Sign warning of wind gusts of 35 mph! And that's apparently on the low side. Just a few days ago, they were up to 50+! 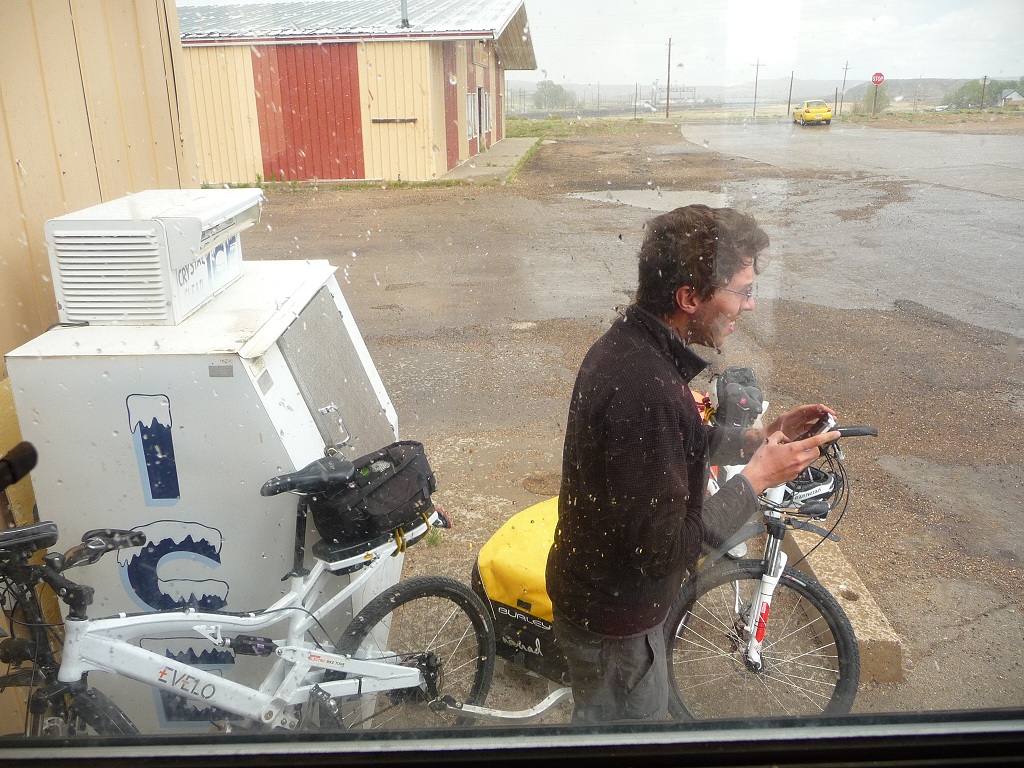 The winds also bring about sudden changes in weather. During a lunch break, all of a sudden is started to hail.

Whereas normally, we’d be able to cover the daily distance in just 6-7 hours, that day took us over 14 hours to arrive to Rawlins, WY for the night. While riding electric bikes certainly makes it a lot easier – as we’d be even slower otherwise – it was still likely the most difficult and frustrating day we’ve had thus far.

The day after that was almost as windy as the one before. Additionally, we had another interesting development. In this particular stretch of Wyoming, the only way to get from East to West is on the Interstate 80. Unlike everywhere else, there are no county highways and no frontage roads – only the interstate. In fact, while cycling on them is expressly forbidden in most other places in the country, it doesn’t raise too many eyebrows here. 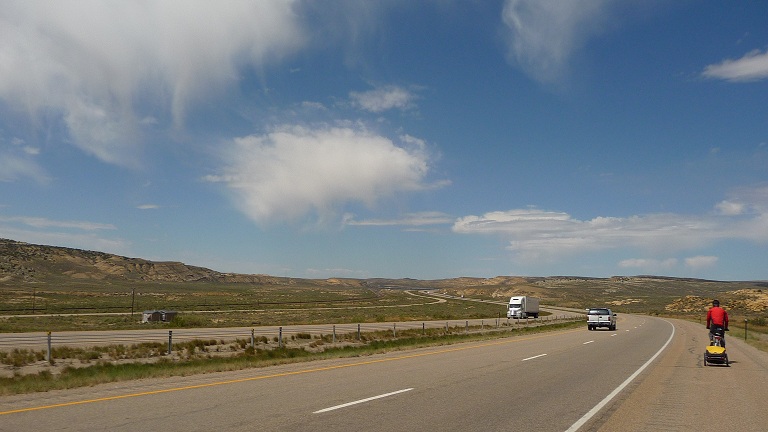 It took a little while to get comfortable with the semi-trucks passing you so close by, but after a few hours, we’ve gotten pretty used to it. Fortunately, the road was not too busy and most of the cars are relatively polite and would try to give as much distance as possible. 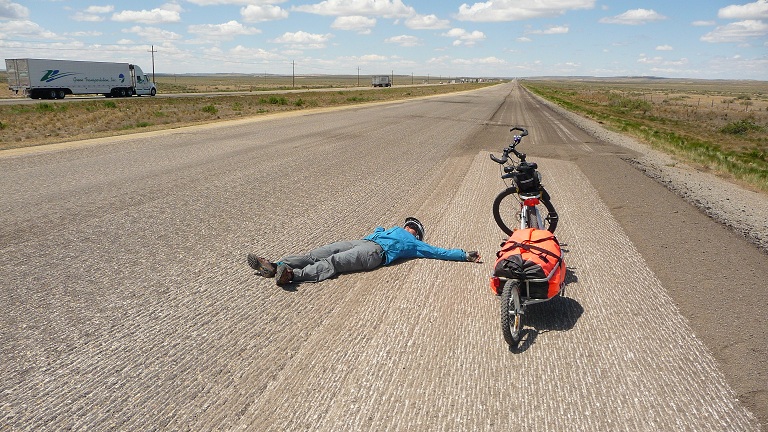 Taking a break from the wind on the stretch of the interstate that's under construction. No traffic here!

The planned distance for this day was considerably shorter, so we’ve arrived to the town of Wamsutter, WY by around 5pm. When researching the town in advance, we’ve found 2 motels on Google Maps in the area. Neither inspired much confidence with reviews like “This should only be a stop of desperation” and “this motel scared me off before I even got out of the car”, but we figured that we just need a place to spend the night and the reviewers were probably overreacting anyway.

What we didn’t expect is that both of the motels would be sold out. Apparently, while Wamsutter, WY is not much of a tourist destination, it is a big boom-or-bust oil town and right now was in the middle of a boom. As a result, both motels were sold out to long-term worker tenants. As we were trying to sort out the situation, the local sheriff approached us to see if we need any help. After hearing our predicament, he tried to find alternative accommodations by making a few calls, but to no avail.

Fortunately, by that point, we had our plan B cooked up.

There was a truck stop with a cafe right nearby that was open 24 hours. While not our ideal choice of accommodations, it was a better option than biking 60 miles during the night on the I-80 to our next destination. It was warm, there was an abundance of food, and we had an unlimited Netflix account to occupy us during the night. So, we pulled in, got our bikes and trailers in, and went to grab a bite to eat. 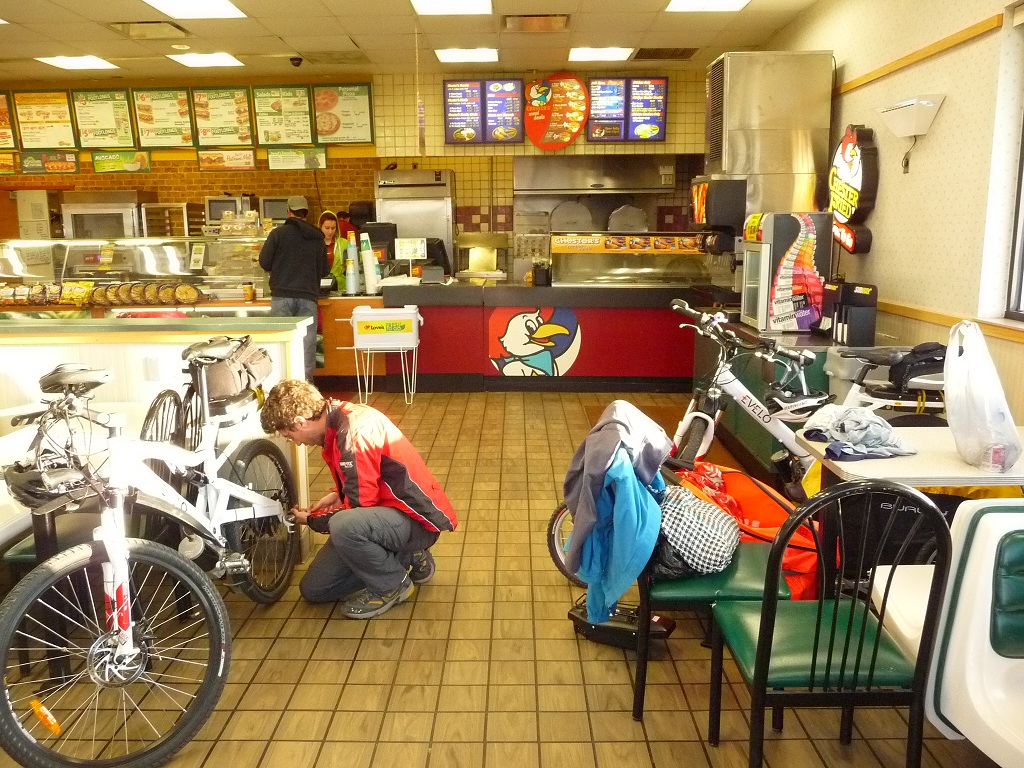 Making ourselves feel at home.

As we were pondering over the menu, a young guy approached our bikes and asked where we were headed. We started talking and eventually sat down to eat dinner together. He turned out to be a Russian truck driver from Chicago. As all of us were originally from Former Soviet Union and had quite a few things in common, our conversation continued for quite a while until he noticed that Anna was getting sleepy.

“Where are you guys staying,” he asked. That was a bit of an awkward question to answer, but we said that we were planning to stay here until about 4-5am and then just hit the road. After thinking about our situation for a few seconds, he responded: “that’s no way to spend the night! You guys are going to be exhausted tomorrow. Look, I have a double bunk-bed in the truck. If you guys can fit, you should stay there.”

It was an appealing offer. Not only it meant an actual night of rest, but we’d also get to spend it in a semi. That would be an adventure in it of itself! So, we accepted his generous offer, left the bikes at a cafe under the watchful eye of the clerks, and headed for the truck. Overall, this turned out to be great – we had a good night, made a new friend, and just proved to ourselves again that things always tend to work out one way or the other. 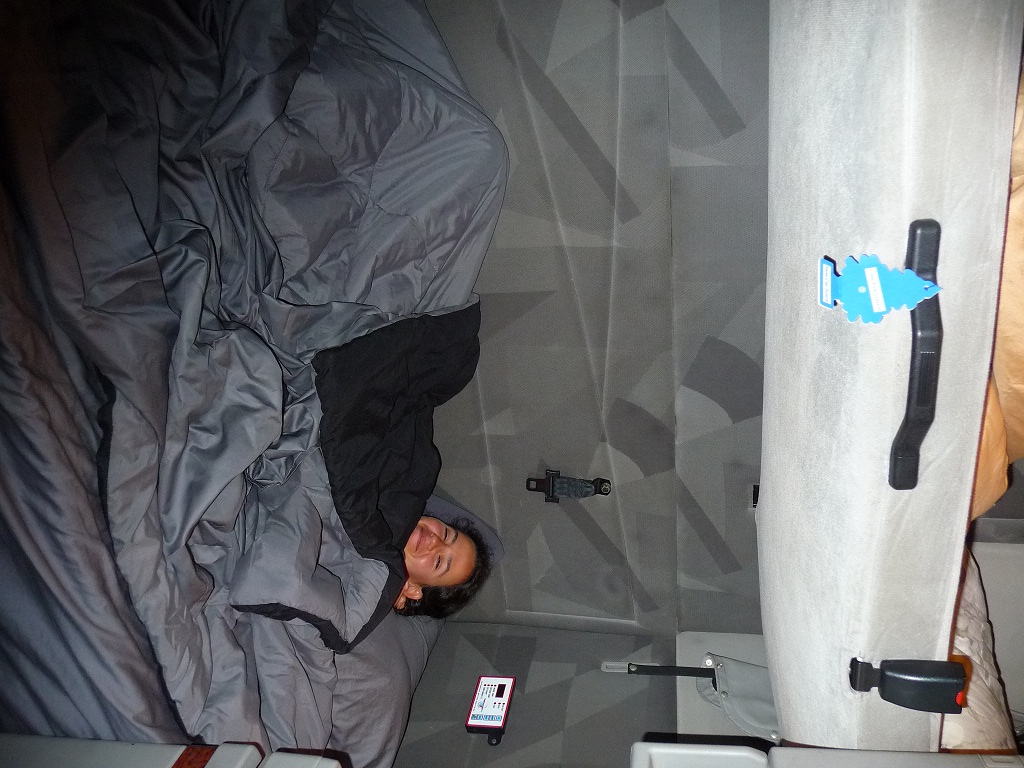 Anna ready to doze off! 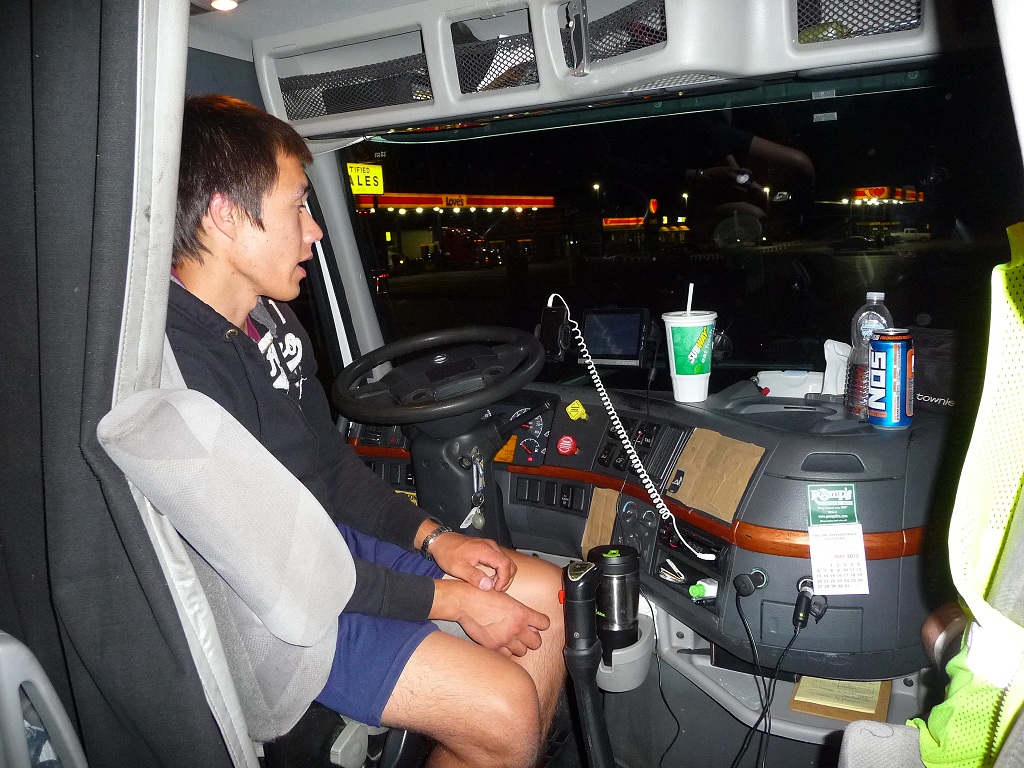 Staying up a little later for a chat. 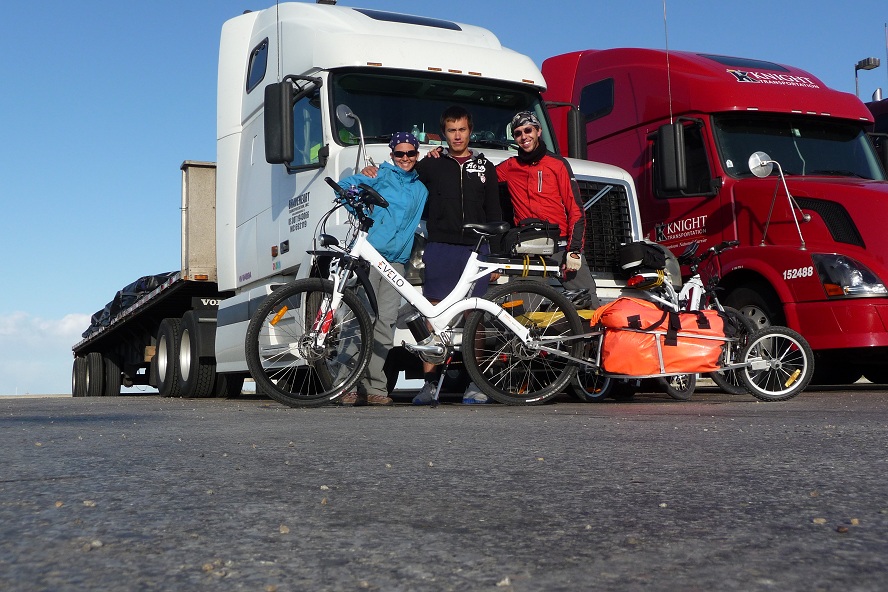 Saying good byes - the morning after.

The two days that followed that turned out to be significantly easier. The headwinds have slowed down and we would get on the road a lot earlier than usual to avoid the worst of them. Tonight, we’re in Lyman, WY – just 2 days away from Salt Lake City! Stay tuned for updates from the final stretch.