A question that often comes up when we talk to others about the Trans-American tour is where the idea for it came from.

We have to admit – we’ve had quite a bit of inspiration from others. There are so many people who are doing amazing things out there, and learning about their adventures has inspired us and made it easier to plan our own trip.

As we near the end of our tour, we wanted to take the opportunity to share with you the stories of four individuals, each of whom has also accomplished an “epic” trip on an electric bike.

When we were getting ready to start our trip, deep down, we hoped that somebody would get inspired by the Trans-American Electric Bike Tour to do their own “ride-of-a-lifetime” – the same way that these fellows (and others) inspired us!

1) Electric Bike World Tour – Spanish adventurer Guim Valls Teruel set out from Beijing in 2009 to circumnavigate the world on his electric bike over the course of 3 years. Guim was a big motivation for us and has advised us on many matters concerning the tour. We’re very enthusiastic about his trip and the precedent that he’s set for others. 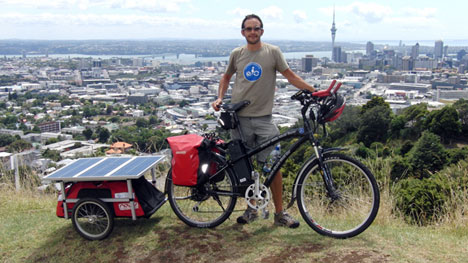 As a side note, towards the end of his trip, Guim married one of the reporters in Vietnam who interviewed him about his journey and then settled down in Vietnam and opened up an electric bike shop there. To learn more about him, watch the video below or read more here.

2) Tour de Sahara – In February 2011, journalist Susanne Bruesch and German electric bike dealer Sebastian Plog set off on a cross-country expedition through Morocco’s desert and alpine landscape. This adventure took them on a trip of almost 1,250 miles over the Atlas mountains and through the Sahara desert. Towing solar trailers to recharge, their electric bikes have done a fantastic job tackling the varying terrain. Their website is in German, but you can download a PDF brief of their tour. 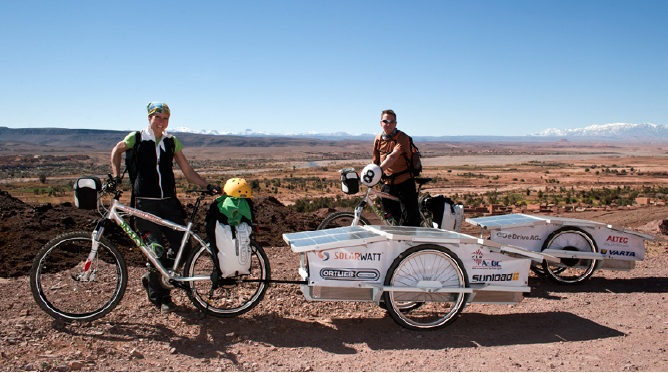 3) 18,000 km Around Australia – Maximilian Semsch is a 28 year old explorer from Germany. He set out on an 18,000 km journey around the perimeter of Australia on the 1st of January 2012, beginning in Sydney and following Highway No. 1 clockwise. He should return to Sydney by the 30th of June, exactly half a year later. Between the two dates lie 18,000 exciting kilometers.  More info is available at here. 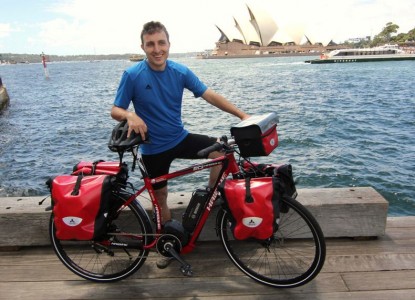 4) E-Bike Journey Across Canada – Justin Lemire-Elmore spent one month riding his electric bike across Canada a few years back. He made the journey from Vancouver to Halifax in 30 days using a mere $10 worth of electricity to recharge his bike. He put together a rather interesting looking semi-recumbent bicycle to hold all of his gear. The motor controller, charge controller, battery packs, and lighting system were all his own design. There is no website for the journey, but he has an interesting 2 hour presentation in which he describes all the problems he had with his equipment during the trip as well as all the great experiences the journey offered.

We hope that you’ve found as much inspiration in these stories as we did. And we’d LOVE to hear what trip you would like to undertake yourself? Whether a weekend or a year, regular bike or electric, all ideas are welcome and encouraged .. Just respond with a comment below and let us know!