We Like Our Cities Bicycle-Friendly, Especially Now, A Month Into the Tour

When we began to plan the route for this trip, we had several agendas in mind. The most important was to pass through centers with a strong bike presence, so we could learn what different cities across the country are doing to promote bicycling. We did some research and came across Bicycling.com’s “America’s Top 50 Bike-Friendly Cities,” which was the basis for our initial destination choices.

By the time we had mapped our final route, we were excited about seeing some of those Top 50 places firsthand to learn what makes them bike-friendly. Though we’re not yet halfway done with the tour, we’ve already gained a lot of knowledge and insight into what various cities are doing to encourage cycling and introduce it into mainstream culture.

So, how exactly does a city qualify to be placed on a list of the top 50 bicycle-friendly cities?

Infrastructure is one big factor. The city must have bike lanes, municipal bike racks, or bike boulevards. The local bike culture is also an important determining factor. If the city has a vibrant community of bike enthusiasts, clubs, and bike shops, it is certainly going to be a candidate for the list. 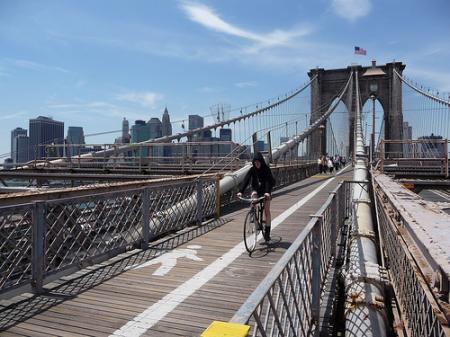 Sharing the bridge with pedestrians

We didn’t have to venture far to find a city that exemplifies bicycle friendliness. Our very own New York City, close to home for both Boris and me, and the starting point of the tour, is ranked #8 on the list.

I used to find biking in New York to be unnerving. Every ride was a dodge-the-cab, avoid-getting-hit-by-a-bus, hang-on-to-your-handlebars kind of race. For adrenaline junkies, this is adventurous. For the safety-conscious, this is dangerous. But when I started to ride again in the city a few months ago, I noticed an immense change. I didn’t feel like I was negotiating with death every time I climbed onto a bike saddle.

In the last few years, New York City’s biking infrastructure has been transformed. This is due largely to Transportation Commissioner Janette Sadik-Khan, who “has directed the installation of more than 250 miles of bicycle lanes, turned parts of Broadway into pedestrian plazas and eliminated hundreds of parking spots across the city”. Those who applaud her efforts say that there are twice as many cyclists on New York’s streets now.

Another big development in New York is the upcoming July launch of a bike share program. The program is sponsored by Citigroup, and will be the largest bike-sharing system in the US, according to Mayor Bloomberg. With 10,000 new bicycles on the streets, New York should see a change in transportation dynamics. More people will opt to bike their short-distance commutes and more drivers will be aware of the increasing number of bicyclists on the roads.

Let’s look at another example: Chicago, IL — #10 on the list. One of the best city riding experiences either of us have ever had was in Chicago. To get to our evening event where we were going to meet with bike enthusiasts from the area, we took a network of bike lanes that eventually spit us out onto the ever-popular Lakefront Trail, a car-less stretch along the shore of Lake Michigan. We were the only riders on a cold, windy night, enjoying views of the bright skyline and watching the rambunctious waves of Lake Michigan hurl themselves at us. Downtown, we passed the silhouettes of dozens of other bikers, who seemed perfectly content with braving the cold.

The enthusiasm for biking in Chicago owes itself to a long-running history of cycling in the city and to the city’s leadership. Chicago’s previous mayor, Richard M. Daley, created the Mayor’s Bicycle Advisory Council (MBAC), which has established more than 100 miles of bikeways and invested in many other bike-related projects. Those involved with the Mayor’s Bicycling Ambassadors program appear at events all year round promoting bicycle safety and education, and encourage Chicagoans to ride their bikes more. There is a monthly Critical-Mass Bike Ride, a Bike-to-Work Week, and hundreds more events organized by the city’s many clubs and advocacy groups. The night we were giving our presentation, for example, four other bike-related events were happening! 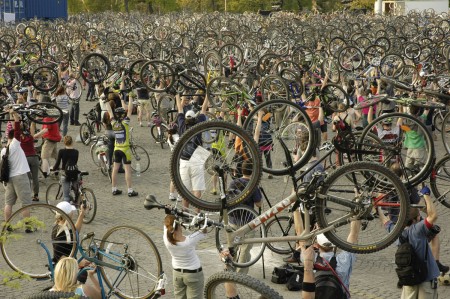 But to truly appreciate bike-friendly cities, one needs to experience some not-so-pleasant city biking to put it all in perspective. Boy, does it feel good to see that spray-painted bike figure in his designated lane sometimes! After too many close encounters with “sharing the road,” if the painted man is announcing that a portion of the road is actually for bikes only, I inwardly give a cheer! Mostly though, we’ve had ample opportunities to explore both sides of the spectrum – bike-friendly and bike-not-so-friendly. Toledo’s cracked pavement and traffic jams sent our heads spinning. Stretches of Pittsburgh’s shoulder-less roads and blissfully-bike-unaware drivers reminded me of my old New York biking fears. After experiences like those, we are justified in our heartfelt kudos to cities like New York, Chicago, and all the rest who are working toward a bike-friendly reputation.

So, what motivates a city to strive to be ranked “bicycle-friendly” and pursue bike expansion projects? Obvious reasons include congestion reduction, traffic management, and developing a more environmentally-friendly space. But, there is more. Bicycles are also great for a city’s economy. Bike shops, bike tourism, the cost of bike parking versus car parking, are just some examples of the economic benefits of city biking.

But probably most important of all? Bicycling makes people happy. It offers a great alternative to the drudgery of the daily commute, whether it is usually spent sitting in traffic or standing on an overcrowded bus. It can do wonders not only for a person’s physical health, but their mental health too! 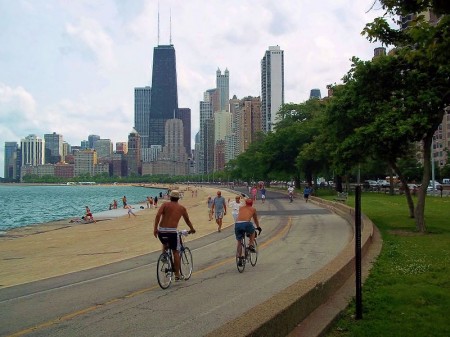 Lucky Chicagoans can bike at the beach and the smile factor is gigantic!

So, let’s enjoy our bicycle-friendly cities, and consider how those lagging behind can take measures to create more bikeways, increase bike enthusiasm, and make it onto a Top 50 list