This two and a half month-long adventure has come and gone, but it has left a lifelong impression on both of us. We’ve learned a lot from each other, our experiences, and all the people we’ve met along the way. We wanted to share some of these revelations with all of you and hope that you can find some inspiration and lessons in them for yourselves.

1.  Everything has a way of working itself out.

We had many tight situations on this journey – from the time I got injured, to when all the acommodations were booked for the night in Wamsutter, WY and we had to sleep in the cab of a semi-truck. There were many other interesting challenges, like headwinds, desert weather, and of course multiple bike breakdowns. But, in the end, everything always seemed to work out. Injuries heal, lodging alternatives arise, the winds die down, and you’re able to improvise solutions to mechanical issues. If you’re able to go along with these surprises and face them instead of giving up, the world will work its forces towards your favor.

2.  You can find good people everywhere.

When we are young, we are often taught never to talk to strangers – and as a result, we grow up feeling that other people may have ill intentions towards us. One of the best things about this trip has been the people we’ve met on the road. Everyone has been genuinely kind and willing to be there for us. Wherever we ended up, we always found an open door and a helping hand. This just goes to show that good people can be found everywhere, that friends can be made in all sorts of strange corners, and that we all have an innate ability to be generous and helpful to one another.

Before starting this adventure, the whole “biking across the country” idea was abstract. It seemed even more surreal on our first day when we were pedaling in New Jersey, and processing what the next two and a half months were going to be like. “Are we really going to make it?” we both thought, but didn’t dare say it out loud. You can’t jinx a trip with negative vibes like that on the first day. But, as we pressed on, developed a routine, and started covering more miles, the trip not only made more sense, but became a plausible and doable venture. We learned that with patience and a bit of tenacity, people can do incredible things. Just take it one mile at a time, focus on the day’s goal, and you can go a long way.

4.  Bungee cords and duct tape save the day.

I’ll never question the value of nylon string, bungee cords, and basic duct tape again. We’ve been able to get away with using the most basic tools to solve some of our biggest problems. This taught us that you don’t need much – just a little creative thinking. These improvised solutions have also become some of the most memorable moments of our trip. So along with the funny imagery to reflect on, I also learned not to doubt Boris when he has an idea about how to use a set of bungees and some string.

5.  Just ask, and you’ll be surprised what you’ll receive.

We’ve been amazed at how receptive people have been to our requests. Over the course of these two and a half months, we’ve asked for everything ranging from discounts from motels, to sponsorships, interviews, and event partnerships. And it’s simply amazing how often these requests were granted.  If you have a clear goal and convey your honest intentions, people will listen and work with you – all it takes is the simple act of asking.

It’s easy to give reasons for not doing something, and much more difficult to give reasons for doing it. “I can’t afford to take the time off, I’m out of shape, I’d never be able to make it,” are just some of the reasons people give for not being able to pursue adventures that they really want to do themselves. We are pretty far from Olympic athletes or avid bike racers – we gained most of our biking strength from being on the tour and went from being tired after 40 mile days to feeling like rock-stars after 70 mile days. At one event, one of the attendees said to us that if you can bike for 40 miles in a day, you can go cross-country on a bike. It’s absolutely true!

When I was traveling for a few months in Africa last year, a fellow traveler shared a tip with me: “When things go wrong, as they inevitably do, don’t get frustrated and don’t rush to fix it. Instead, grab a Coke, a beer, a snack and just relax for a few minutes first. Then fixing the issue becomes a much simpler and less stressful task.” This tip turned out to be incredibly useful during this trip as well. To solve problems well, you need to be able to gain a bit of perspective on your situation first and taking a break helps you do just that.

In one of our earlier posts [link to it], we talked about the sort of things we think about while riding for 8+ hours per day. The truth is, sooner or later, even with spectacular scenery and the most engaging riding partners, you can get bored. Having an audiobook or a podcast is an awesome way to keep yourself engaged and actually learn something while you are on the road. A special thanks to Stephen King for many hours of listening pleasure!

3.  Pack lightly when you can.

As our trip had a specific work purpose, we had to carry certain equipment like laptops, batteries, promotional materials, and so on. However, if you’re just going on a pleasure cycling tour, there is really very little that you need: a set of clothing for when you’re riding, a set of clothing for when you’re not riding, a toothbrush, an iPhone, and a credit card. Think about the stuff that actually gets used 90% of the time and leave all of the 10% items at home.

4.  Don’t expect it to be great the entire time.

We have a slide in the presentation that we show throughout the trip of a cyclist taking a break while admiring a beautiful sunset. We put it there because I think it’s common to an have overly romanticized view of bicycle touring – roaming through pretty countryside, a gentle breeze at your back, without a worry in the world.

Sure, touring can be like that sometimes, but it can also be hot, tiring, and challenging – all of which can lead you to question yourself for starting up the whole business in the first place. These low points always go away, but it’s important to set your expectations right from the beginning. Once you accept the fact that you won’t have 75 (+/-) perfect days on the road, the whole trip will go much smoother.

When Anna was injured in the middle of the trip, I spent a few weeks riding alone through Iowa and Nebraska. To tell you the truth, it was scary at first – especially because these were the least populated states we have encountered. It wasn’t even that the safety was so much of an issue, but rather the idea that you were completely on your own, with no one else to count on or talk to but yourself. After all, how often are we really, truly alone in our lives? However, after the first few days, it no longer seemed so daunting or isolating. I found silence to be enjoyable, self-reliance to be invigorating, and myself to be even more attuned to my surroundings. While I don’t think I’d like 75 days of riding on my own, those few weeks turned out to be incredibly special in their own regard.

I consider myself lucky to have a partner who is incredibly strong-willed, good-natured, and fun to be around. I’m amazed by her tenacity and the fact that there is little that will phase Anna. While I love and admire all of my close friends, there are very few people (with the exception of Anna and one other individual) with whom I’d be able to spend 24 hours a day, for 75 days, in all kinds of stressful situations without getting on each others nerves. If you’re considering a bike trip of your own, invite Anna as your cycling buddy – you won’t be disappointed!

It’s been a fun ride, and we’ll both probably be in denial for a week before realizing that the trip is in fact over. But, we’ll always have something to reflect back on and the lessons we’ve learned will guide us through future work, travel and who knows, maybe even more bike touring pursuits.

Thank you all for your wonderful support and encouragement over the last two and a half months. Reading your comments, meeting you in person in different cities, and experiencing amazing hospitality from many of the people whom we met were the true highlights of this whole trip. 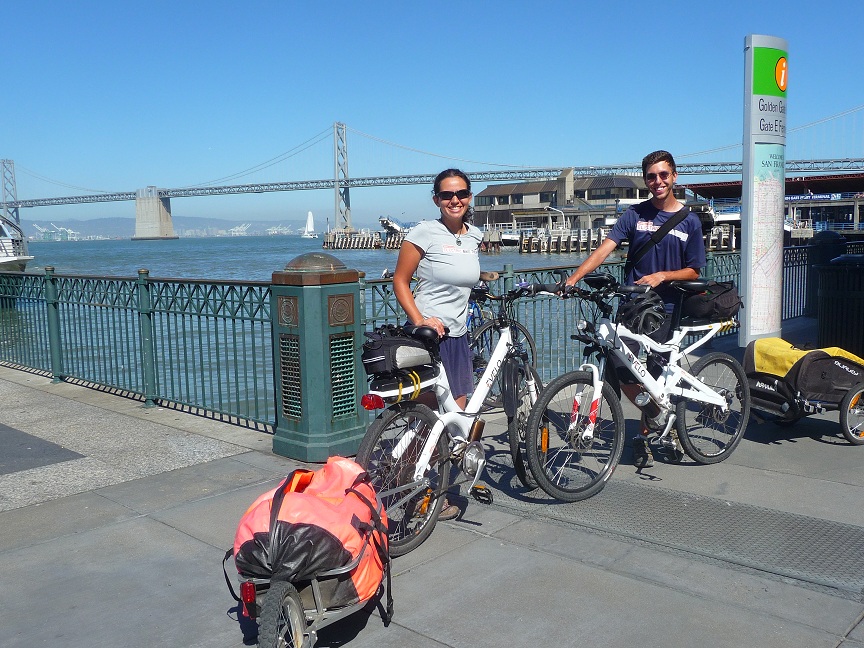 Arriving in San Francisco at the end of the tour 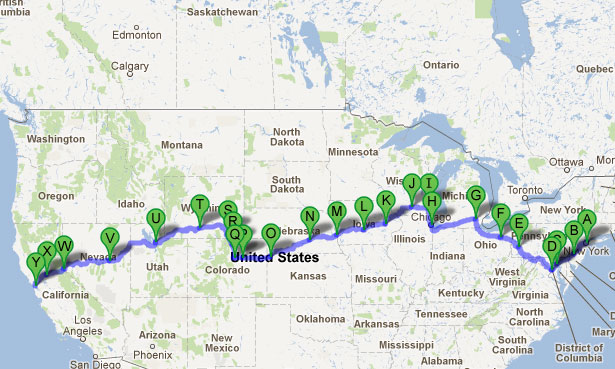 The route from sea to sea