A Test Of The Mind

I clearly remember him saying, “You guys will be able to do it physically, no problem. It’s all mental though, that’s the hard part.” These words of wisdom came from Gerald, the bike mechanic who checked over our bikes prior to starting the tour, and the source of much useful info we’ve had need of in the last three weeks. But it wasn’t until recently that we really understood what Gerald meant about the mental challenge of this trip.

I’ve always wondered about the thought-process of long-distance bicyclists. What do they think about on long stretches? What could possibly be going through their head on their tenthhour of pedaling? How do they stay motivated, even during hardships faced on the road?

Well, this journey has given me a lot of insight into the workings of the mind during such trying times.

You may recall me talking about our first 90-mile day on the GAP trail in Pennsylvania. When I wasn’t admiring the scenery or staring at Boris’s back, I’d get songs stuck in my brain. You will also recall that the closer we got to our destination, the more we both started thinking — make that obsessing — about food. Giant, greasy burritos, in fact.

In turns out, most other thoughts you have as the miles fall away behind your wheels are also primitive in nature. You anticipate the next bathroom break, drinking water, getting some rest, but most importantly, as mentioned above – eating.  A lot.

During one of our late afternoon break stops in the Middle of Nowhere, Ohio we sat back on a picnic table and admired the flatness of the farm fields around us. It was another long day and we still had 20 miles to go. “So, what do you think about when you’re not listening to music?” I asked Boris. “White line, white line, white line. And then I kind of zone out, ” he responded. “See, that’s the difference between men and women – you guys can just space out, while I’ve manged to recite an entire encyclopedia of thoughts in the last 70 miles,” I said, slightly jealous that my brain isn’t capable of shutting up for more than a minute at a time. “Sounds rough,” Boris contemplated, without much visible concern for my sanity.

Thinking only about the white line

David, a fellow we met at the Ann Arbor Earth Day event, asked us a similar question — “What do you think about on long days?” “I edit blog posts,” I told him. That’s right, I’ve mentally written and rewritten at least three entries on the stretch between Pittsburgh and Chicago. “Nothing,” said my partner. Not really true, as he spends most road time processing his Stephen King audio book, analyzing mileage, or fixating on food. “Man, this book is getting pretty heated!” he told me when we stopped at an intersection outside of Chicago. Amused by his excitement, I reconsidered mental blog revisions for investing in an audiobook myself.

The hardest 13 miles we’ve ridden so far were on our way into Ann Arbor, Michigan. It was late, cold, and rainy. The strong headwinds, steady uphill climb, low battery status, dead GPS, and soggy feet didn’t make the situation better. Basically, we were faced with the “perfect storm” of combination of conditions that would make anyone question a cross-country bike trip. “I think I understand what Gerald meant about it being mental,” said Boris, drenched and shivering as we waited for a light to turn green.

These are the moments that test your mental tenacity. When all forces are working against you, including your body, your mind has to step in and say, “All right. Listen up. I know this sucks, but let’s get through it, okay?”

The rewards are the best part, and make all of that thinking that we do — in our different ways — a worthwhile endeavor.  Finally, the day ends and you can chow down on that burrito you’ve been dreaming about for hours. You can expand your thinking beyond the next mile and the next rest break. You can take a warm shower after a cold ride through the rain. Though basic in nature, these end-of-the day indulgences seem like gifts from above, because your mind has been focused on them for so long. The brain can finally hunker down — like your body — and say, “Good job — now it’s time to relax.” 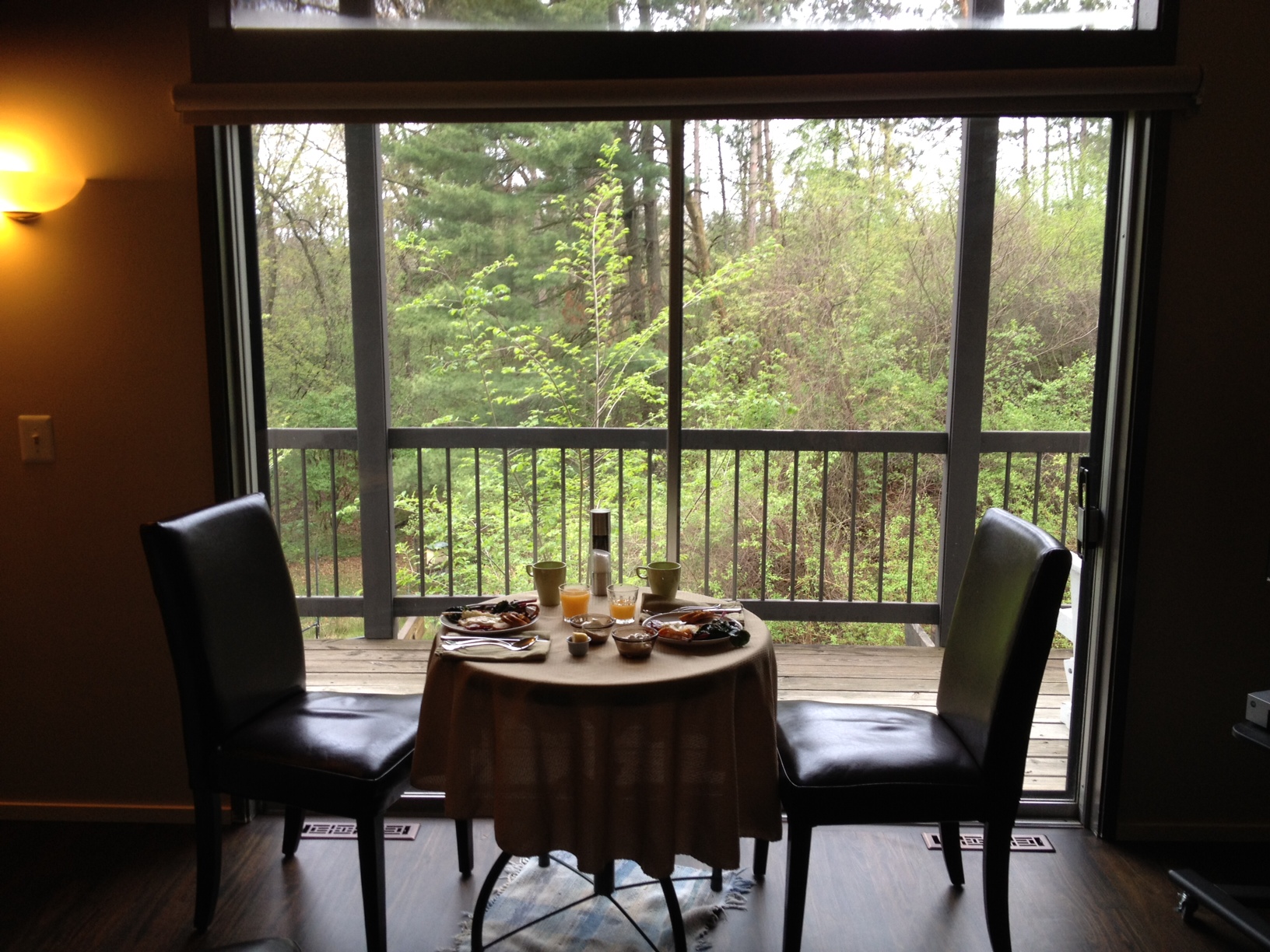 Meal we dream about eating while on the road 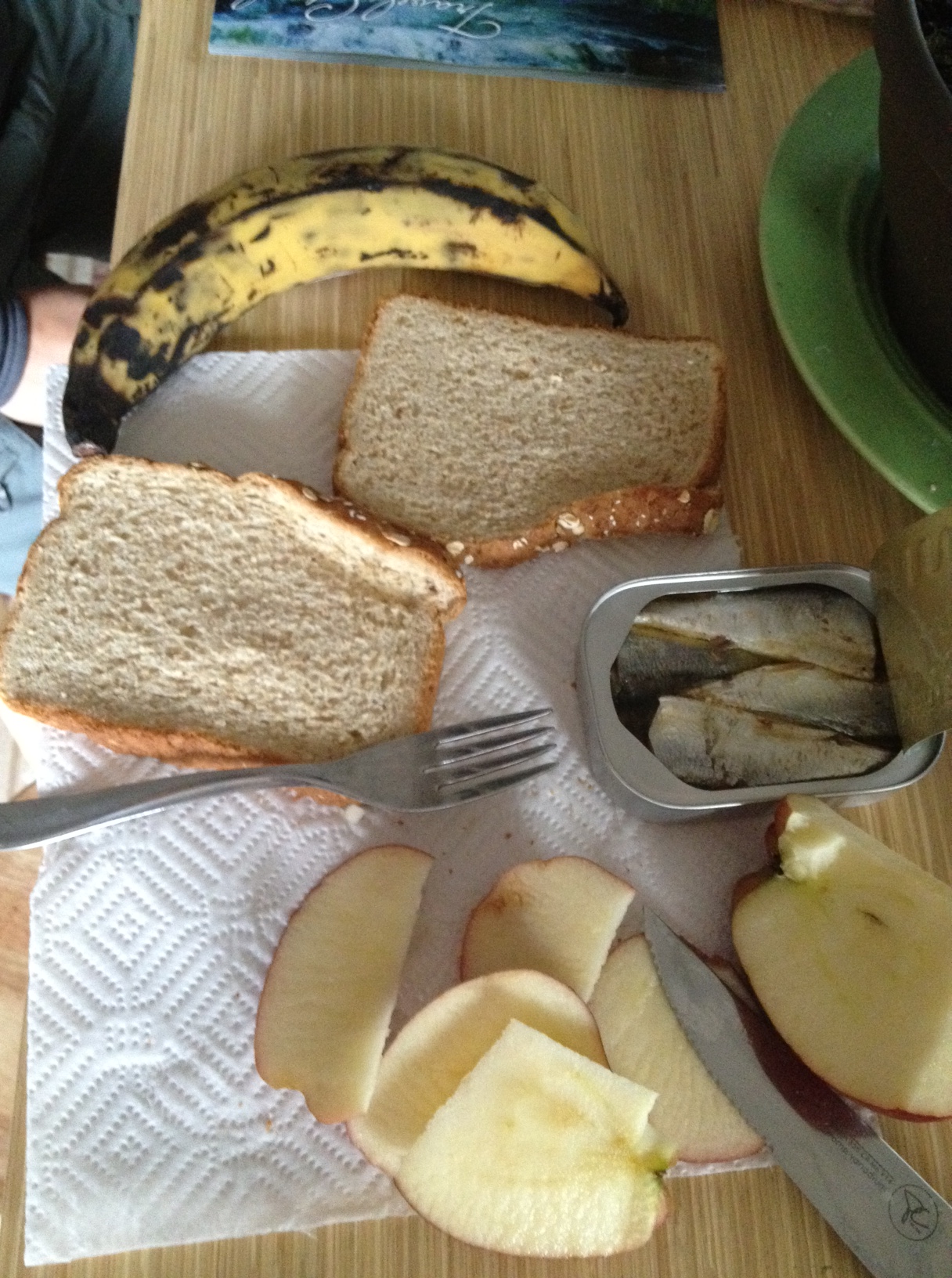 Meal we actually eat during break on the road

5 Responses to A Test Of The Mind