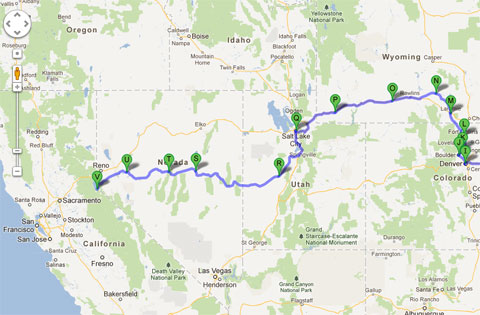 Day #70
Miles Covered Since Fallon: 94
Miles Traveled Since Beginning: 3,504
Where We Are: South Lake Tahoe, CA

Day Overview:  As we climbed up to 7,000+ feet at the Spooner Summit we looked back at the vast desert behind us and waved goodbye. 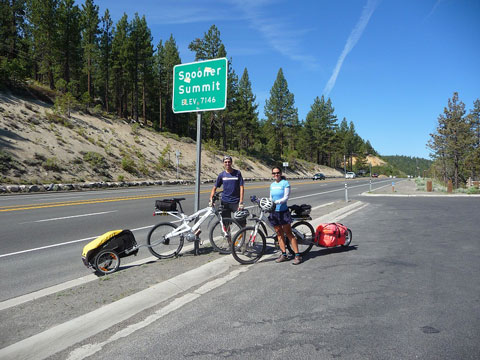 Completing the trek up to Spooner Summit

We’ve been traveling through the open spaces of Wyoming, Utah and Nevada for several weeks, so when we finally reached the dense forest of the Sierra Nevada Mountains, we had to exhale a little bit and savor the greenery. After all, there’s nothing like taking a break under a sweet-smelling Ponderosa Pine or riding through a shady stretch of road after almost a month of desert exposure. 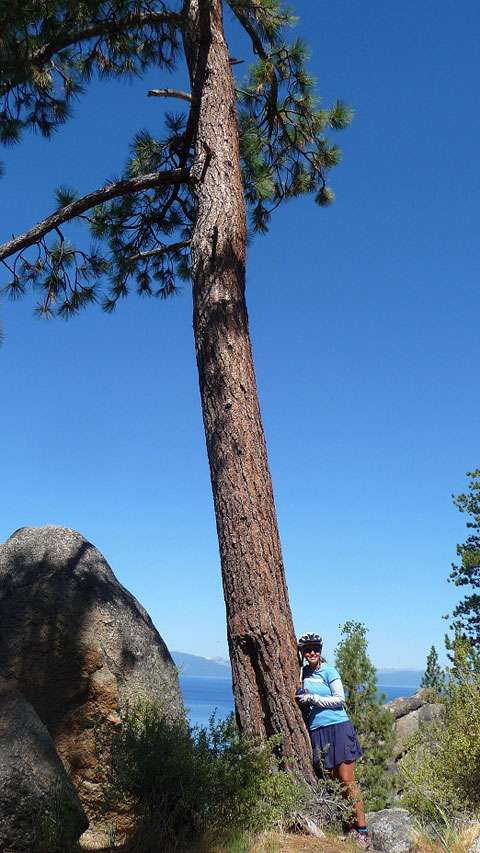 To complement the lush forest, the added effects of a few snowy peaks and the overwhelming blueness of Lake Tahoe were enough to make me forget we were riding alongside other cars. I was in such awe for the forest that I biked along wearing a euphoric grin, without much concern for passing vehicles. Good thing Boris was looking.

We had anticipated the Sierra Nevadas being one of the most difficult range to cross, but neglected to consider how many passes we’d be crossing prior to the Sierras on Hwy 50 in Nevada. So, after more than half a dozen sizeable climbs, and many more smaller, but still significant ups and downs, going over the hump of today was an easy jaunt. And from here it’s all downhill – an easy 150-mile descent to the Bay Area.

We realized for the first time today as we reached California’s state line that the finale is just around the corner. Hard to believe! We can still vividly recall that first day on April 7th when we left Brooklyn and had to cope with the idea that we’ll be living on a bicycle for the next 75 days. The thought was hard to grasp.

Yet, the time has come and passed – and several thousand miles later, the trip no longer seems so daunting. We’re crossing our fingers and hoping that the last leg goes smoothly, without bungeed trailers, 35 mph head-winds or cold, night rides.

Next Scheduled Event: On Monday, June 18th, we’ll be spending the day at The Electric Bike Shop in Sacramento (http://theelectricbikeshop.org/) from 9 am until mid-day. In the morning, we’ll also be joined by the TV crew from Channel 31 “Good Day Sacramento”, as well as a few other special guests. So if you’re in the area, please stop by! The address is 3644 J St, Sacramento.