Day Overview:  Throughout the 3,000 mile stretch of America that we’ve traveled prior to today, we haven’t once encountered other cross-country cyclists. We had high hopes for a while, and then eventually gave up. Where were they all hiding? I mean I know we took a round-about route, and the country is big and all, but come on bikers – where are your weary legs and your shiny panniers!?

But, it just so happens that the Loneliest Road in America isn’t so lonely after all – not for bikers anyway. Today we hit the jackpot – twice!

Our first encounter was with an older man named Mike, who is traveling from San Francisco to Boston. 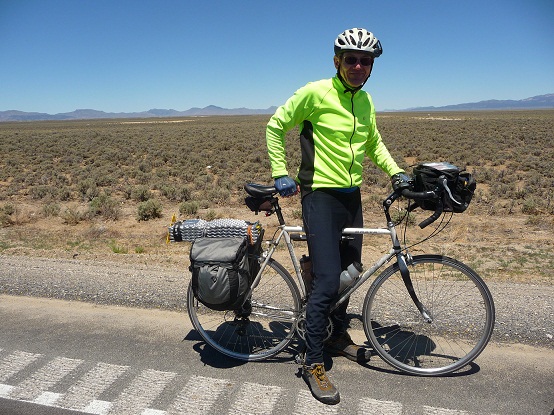 Mike, the first cyclist we've encountered on our tour

He has done this tour several times in the past and according to him, Nevada is the best part of the entire stretch. We agreed that it was a very special area of our vast country. 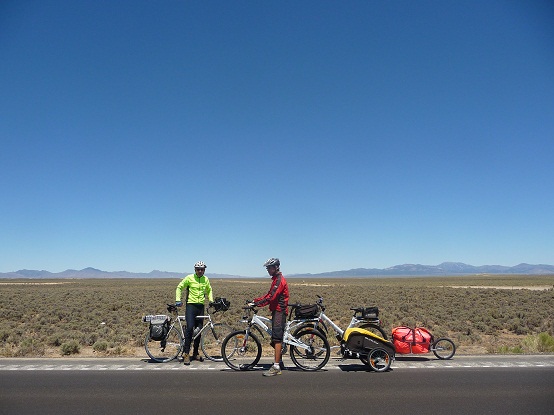 Chatting with Mike on the side of the road

Near the end of they day, as we were flying down Austin Pass (well, Boris was flying – I was slamming the brakes and going at a tortoise pace), we stumbled upon another cycling pair. They are a husband-and-wife team from Holland and they too are traveling from San Francisco and ending in our departure city – New York.

Though we disrupted their uphill momentum they were excited to stop and exchange stories and wind woes. There was even a photographer parked across the road that started enthusiastically snapping shots of all of us. 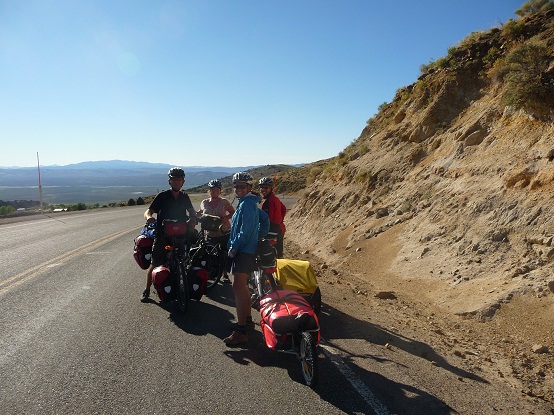 Posing for the enthusiastic photographer with our new friends from Holland

As we were jovially making conversation on the side of a steep mountain, and completely blocking the right lane, the drivers threw us dirty looks. A particularly unhappy-looking old man gunned his truck right next to us – to bless us with a cloud of exhaust fumes. We took the hint, wished the couple safe journeys and reflected on the long journey they have ahead of them to New York.

So, who knows – maybe the season is just beginning or maybe this is an attractive route to cyclists. Either way, we’re glad we’re not the only ones. This also means that we’re not unique to this road and we can no longer use our standard “motel bargaining strategy” of – “well, we’re doing a cross-country bike trip – can you give us a discounted motel rate?” Well, it was good (and effective) while it lasted.