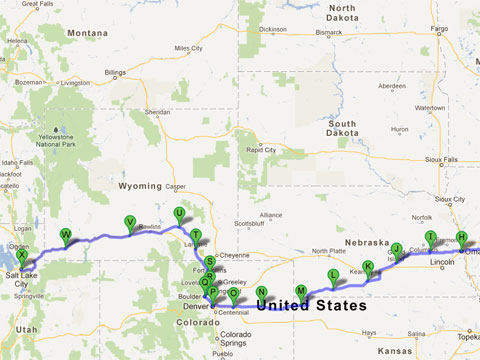 Day #56
Miles Covered Since Lyman, WY: 119
Hours on The Road: Lots and lots!
Miles Traveled Since Beginning: 2,872
Where We Are: Salt Lake City, UT

Day Overview:  As we were happily making our daily progress on I80 the day before, a thought entered Anna’s mind – “it’s surprising how few flats and breakdowns we’ve had so far, considering we’ve been on the road for almost 3,000 miles.”

Naturally, Murphy’s Law would not allow for this. So, without much ceremony, by about mid-day on June 1st, Anna rang her bell to alert me that I had a flat on the trailer. A little disappointed by the interrupted momentum, I climbed off the bike to check it out, secretly hoping that she was mistaken. But there was no mistake – the tire was flat. Moreover, a few seconds later, I noticed that the rear tire of the bicycle was also punctured – the first flat tire on the actual bicycle.

We didn’t recall riding over glass shards or other road-side debris, so it seemed odd. We decided to walk the bikes to the next exit, find a clear spot and fix up the flats.

The trailer tire was completely worn, just like Anna’s had been a week earlier in Wyoming. By the time we installed a new inner tube, the rubber was protruding out of a hole in the tire. We proceeded to wrap it in electric tape, much like applying gauze to an open wound. It seemed like a better solution in our minds than in reality, but it did the trick. At least for the time being. 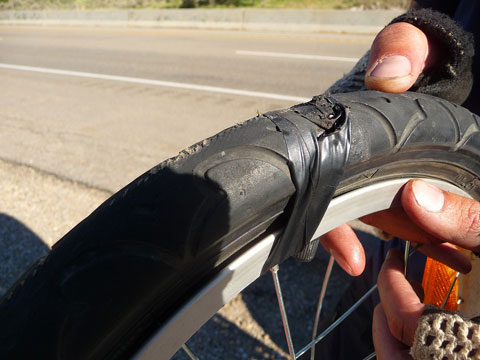 After all was said and done, we got back on the interstate. We traveled about 500 meters and then there was a loud “pop” – much like the celebratory hoorah of an opened champagne bottle. Instead of celebrating, we sighed, because we knew exactly what it was. Our masterfully applied electric-tape remedy didn’t last. Anna was in better spirits than I at this point, because 10 minutes earlier we placed a bet on whether or not I’d get another flat. If I did, Anna would get a margarita. If not, she’d buy me an ice cream. She won.

As we stood on the side of the road, we reviewed our options. We could try the fix-go-break-and-repeat technique for the next 40 miles. Or another idea started to bubble up in my mind. When I proposed it to Anna, she wasn’t thrilled – but was willing to give it a shot.

So, we took the good wheel off her trailer and replaced my deflated one with it. We then bungeed her trailer on top of mine. It was quite the sight – a 3-foot tall, ~150 pound beast trailing behind my suddenly confused bicycle. I was curious to see how the set-up would work on the upcoming 2,000 foot climb and the 3,000 foot descent that was to follow. 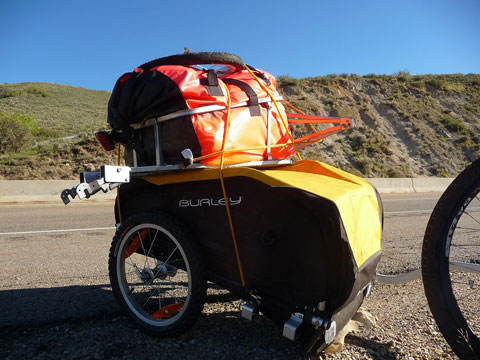 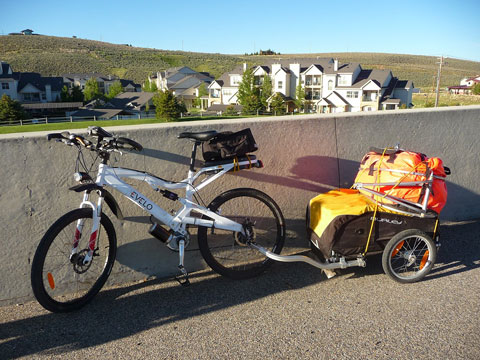 The trailer beast hooked up and ready to go

We set off — me in front, trailer x 2 in tow and Anna, still skeptical, behind. Amazingly enough, the whole thing worked incredibly well. In fact, on the descent, the weight of the trailers pushed the bike to an impressive 32 miles per hour. 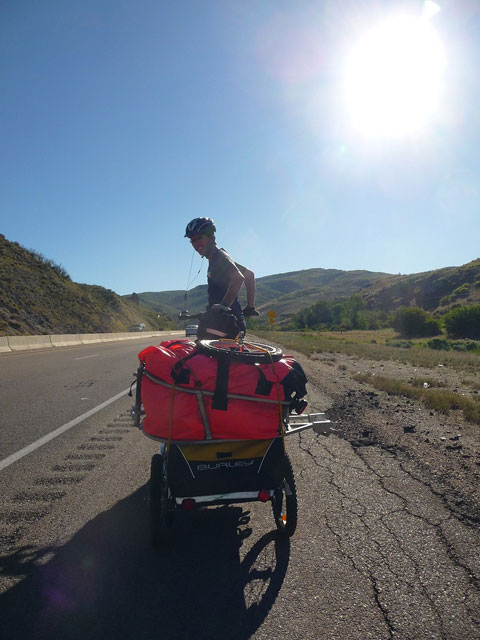 Boris setting off with the beast in tow

So, the lessons learned are:

1) Have a spare trailer tire;
2) Don’t place bets with Anna, because you’ll end owing her a margarita; and
3) Anything is possible, especially with a set of bungee cords and the willingness to do some adventurous experimentation.