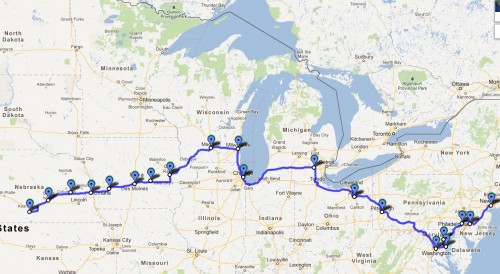 Day Overview:  I was about midway through the day’s distance when I saw a couple of people walking on the highway’s shoulder towards me. It certainly presented an unusual sight – and one that is not a particularly common one either. Of even more interest was the SUV following right after them with its flashers on. I couldn’t help but stop biking and approach them to find out what was going on.

The guy just kept going, but the woman stopped. As it turns out, they are a husband-and-wife team who are walking 1,000+ miles from Colorado towards Illinois to honor the son they lost in the war. The SUV was their support vehicle, piloted by another person riding along for support. We spoke for a bit, but after a few moments, they had to press on to keep to their schedule. 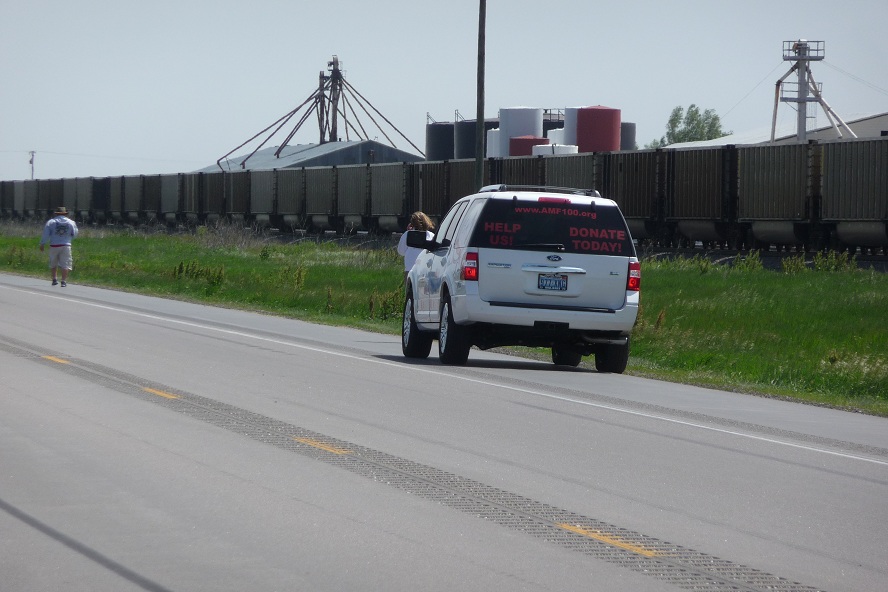 Fellow travellers on the road, on their own journey

As I parted from them, I started to think about all the other stories I’ve heard so far  throughout the trip. One couchsurfer mentioned to us that she had hosted a husband-and-wife team who were walking across America with two dogs to raise money for an animal-focused charity. At some point, one of the pups developed an infection, so they acquired a cart, settled the dog in the cart, and pushed the cart the rest of the way.

A clerk in a motel we stayed at mentioned that she once ran across a woman in her 70s who was traveling around the perimeter of the US … on horseback. I am still trying to figure how she would have traveled through the cities!

But the best story I have heard (so far, anyway) was about two guys going cross-country on a Segway. They had quit their jobs, bought a Segway (just one, mind you!) and were headed from Seattle to Boston at a speed of 10 miles per hour. Afterwards, they produced a documentary about the journry (http://www.10mph.com/). Anna and I had actually watched this movie over a few evenings in the beginning of our trip to draw inspiration from it.

Adventures of this sort are certainly inspiring to hear and read about. Regardless of whether you dream of doing something similar or you can’t imagine ever taking on such an ambitious task, hearing such stories makes you realize that nothing is really off-limits or impossible. It may turn out to be difficult, but rarely is it truly impossible.

Have you come across stories of similar treks that you found inspiring, touching, or amusing? Or have you personally met someone on such a trek and had the opportunity to chat with them about what kept them chasing their objective each day?