Day Overview: Today was promising to be another long 90-mile day before we reached Ann Arbor. It ended up being quite a bit more difficult than we expected because of the shifting weather. Due to a break we took in the middle of the day to catch up on work and an impromptu TV interview that happened during it (see below), we were on the road a little later than usual and got caught in the rain for the last 2 hours of the day.

The bikes handled it just fine. We simply put a plastic bag over the battery and our rear-rack bag and had no issues with the electrical components whatsoever. Biking in the rain, in the dark, against headwind for 20 miles did turn out to be probably the most tough portion of the ~900 mile trip so. But by 9.30pm, we made it to our gracious Airbnb.com and have settled in. Next 2 days consist of a day off and a Earth Day event, so the next road brief will be posted on Monday.

Press Update: An interview with us aired on the NPR today in the Washington area. Should be posted shortly here!

Also, had a really interesting experience during a lunch break in Toledo, OH. As we were trying to figure out how to park the bikes before grabbing some food, they got noticed by two journalists from WTOL (local CBS affiliate) who got really interested in them. They took a quick test ride and then decided to shoot a segment about them on the spot!

Where We Are: Ann Arbor, MI (route completed so far is below) 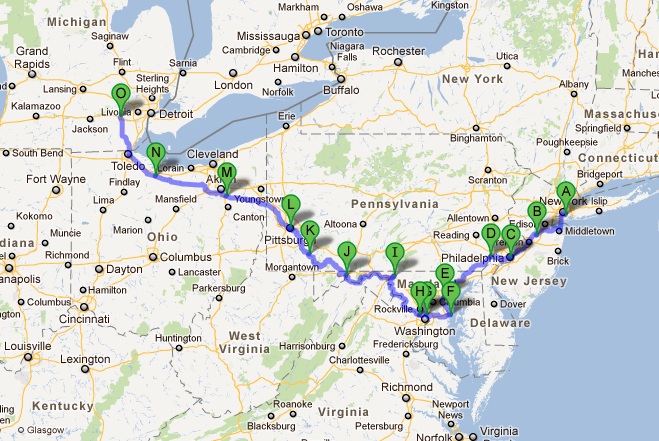 One Response to [Road Brief] Day 14 – Arriving Into Ann Arbor