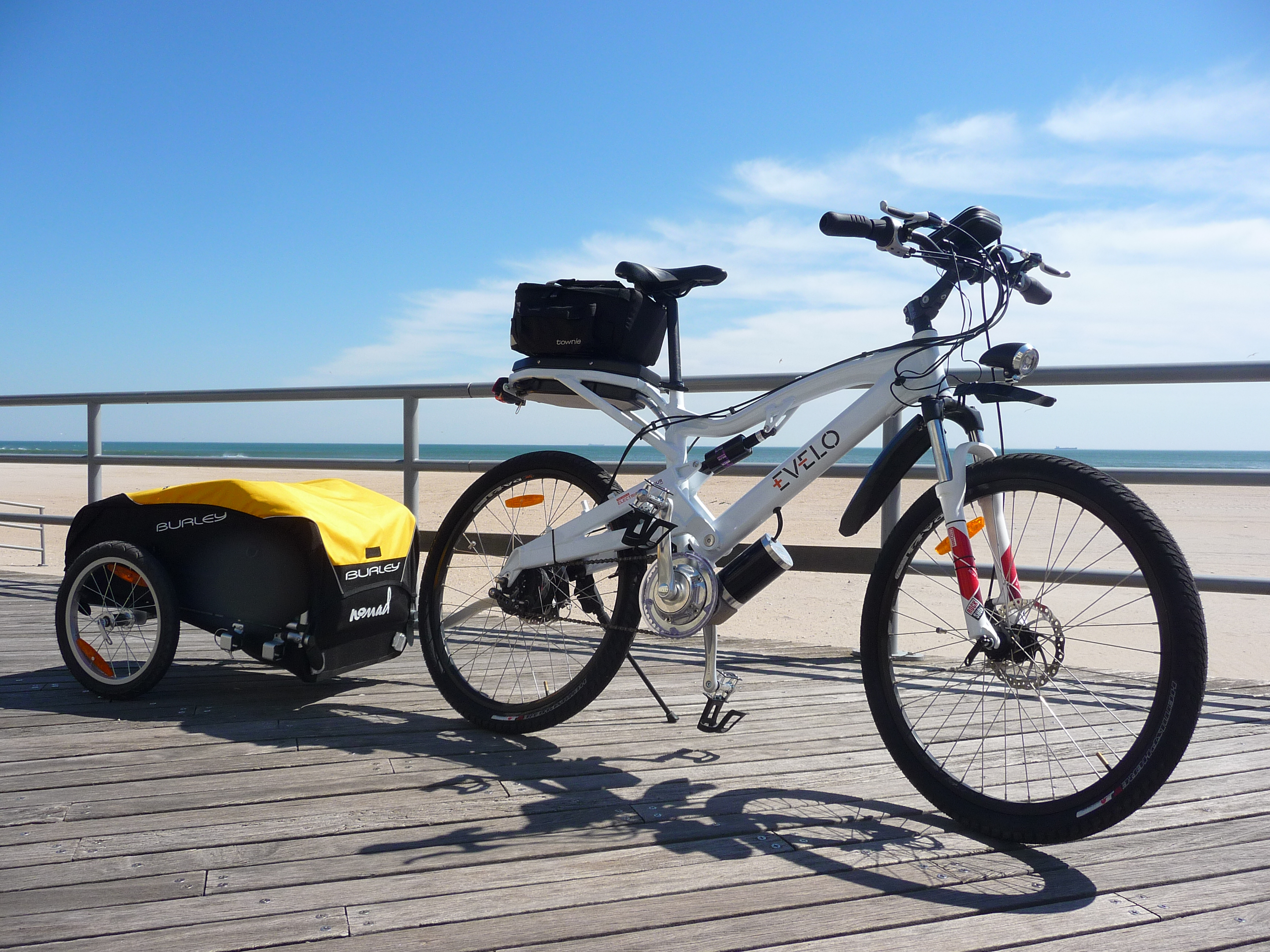 “You’re leaving in a week? Man, you’ve got a lot to do!” said a trusted bike mechanic at a Brooklyn bike shop, as he replaced our tires, adjusted our disk brakes, installed a chain tensioner and roamed all corners of the shop looking for spare parts. My sentiments exactly. “Ahem, usually people come to me months before going on a trip like this,” he said, eyeing us in good humor, as if to say, “come on guys, really…in a week?” But, a week is still a week, and if we say we haven’t been running around in a daze like the cast of Monty Python, trying to get everything in order, it would be a major understatement. So, here is how we’ve been preparing for a two- and-a-half-month, 4,000-mile bike excursion:

Packing lists are one my favorite parts of trip preparation – there is nothing more satisfying than putting a check mark next to an item you meant to pack and finally managed to fit into a physical pile. However, a packing list for a tour like this is rather different from things you’d normally take on vacations, business-trips, etc. So, what exactly do you take with you on an electric bike tour?

Let’s start with the very basics: clothing. Since we’ll be exposed to the forces nearly every day, it’s essential to prepare for all types of weather: rain, wind, cold, heat. The simple solution is to bring several layers, all light, packable, waterproof and breathable. Cycling shorts (bless these! ), rain gear, synthetic tops, and cycling gloves make long-distance riding more manageable and a heck of a lot more comfortable.

We must also anticipate (though we’d prefer not to) potential mechanical issues with the bike. Therefore, we have to pack a multitude of parts and tools: spare tubes, pump, allen wrenches, zip ties, spare cables, bungee cords and the mother of all repairs – a sturdy roll of duct tape.

Now for the electronics: spare batteries, battery chargers, power strips and a controller are all required for the “electric” bike bit. A 21st century ride wouldn’t be the same without a GPS device, though we don’t discriminate against traditional navigation systems, so we packed a trusty U.S. road atlas and compass. Since this is technically a work trip, the laptops and all their relevant components will have to tag along.

Finally, the miscellaneous category overlaps nicely with traditional travel items, so I won’t extrapolate on our toiletries catalog or the things we’ll take to entertain ourselves after many long days of riding. You can just use your imaginations.

Where to store everything

We spent many hours trying to decide where to physically fit all our gear, and this is a debate on which cyclists will never agree: panniers or bike trailers? Panniers are a pair of bags fitted on either side of the rear or front wheel of a bicycle, and attach to a bike rack. A bike trailer is, well a trailer that attaches to the rear wheel of the bike. This is not a wagon, a piece of farm equipment or a truck attachment, contrary to many inquiries – they are specially designed storage contraptions for bicycles, though it would be quite the experiment to haul around an industrial wagon on a cross-country bike trip. We got sponsored by a bike trailer design company called Burley and were graced with one of their own for the trip. So, one bike was set for storage.

For the second bike, we went with another trailer – a one-wheeled, steel, cargo carrier. There are mixed opinions about its functionality. Many love it. Those who aren’t crazy about it say that the attachments tend to bend, and going downhill on steep grades is a hassle, because the wheel will wobble and throw the entire balance off. But, proper weight distribution and speed control can alleviate this issue. I guess we’ll just have to wait and see! 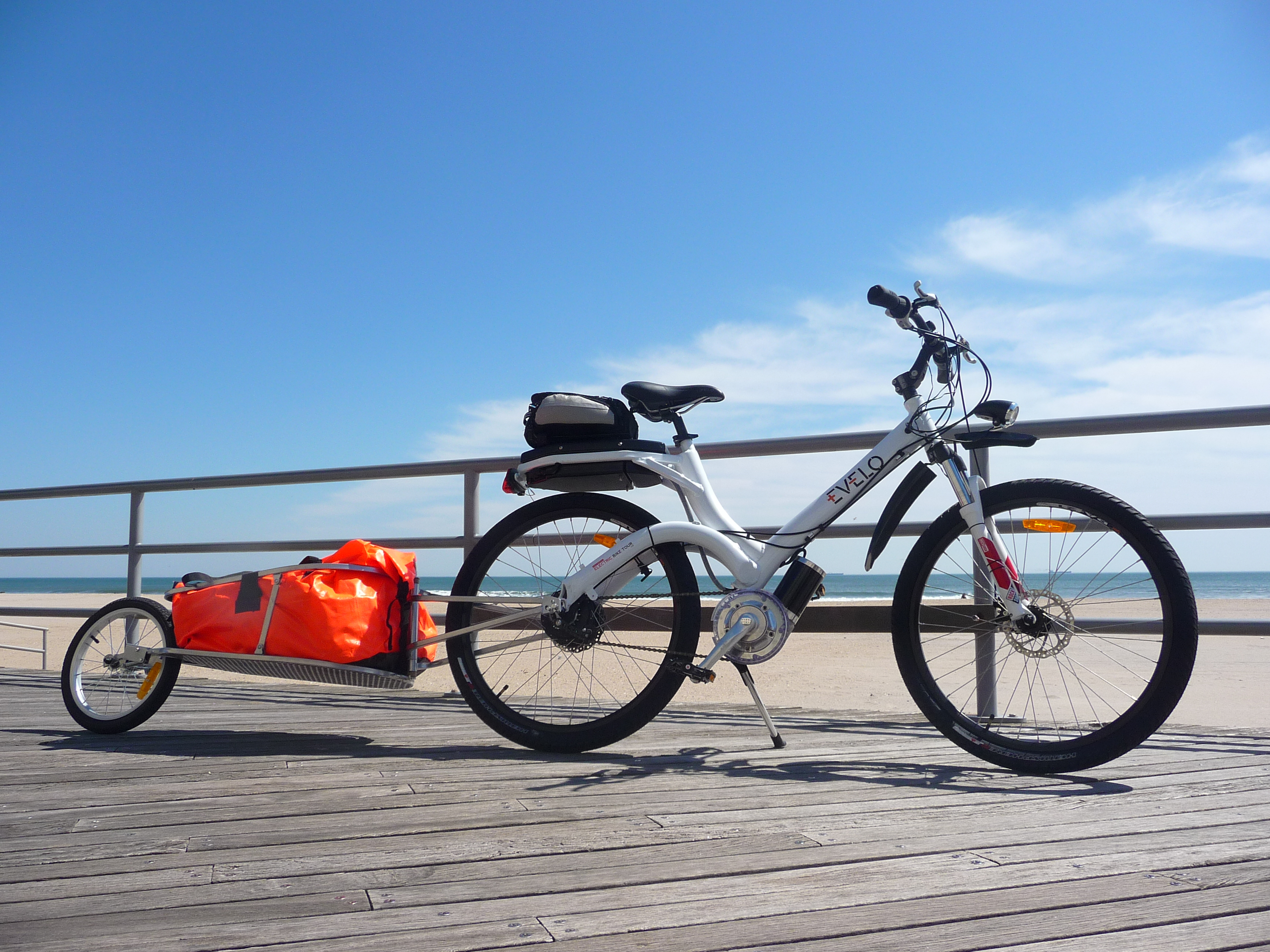 When Boris and I spent a month cycling together through the South Island of New Zealand in 2009, we camped outside nearly every night and essentially carried a temporary home in our panniers. Not only were we flexible in where we could sleep, but if something were to happen, like a break-down, an injury, or a bad turn in the weather, we always had access to shelter.

Though the thought of camping for the next few months was certainly tempting, we decided against it. The nature of this trip is very different from our recreational pursuits in New Zealand. We’ll be riding through many cities, and sizeable towns with limited camping opportunities. Not only this, but our objective is to generate awareness about electric bicycles and having a social outlet which will enable us to do so. What better way to do this than to lodge in the homes of locals living in the cities we’ll be passing through?

We were fortunate to receive a sponsorship from a company called Airbnb, an online network of hosts that rent out their available rooms and spaces to visiting guests. This will be our primary form of lodging for the next two and a half months. We also hope to utilize Couchsurfing.com, an internet community with the same principle as Airbnb, in places where Airbnb hosts aren’t available. Though we’ll miss the fresh night air, campfires and starry skies we’ll be grateful for the opportunity to meet and stay with people of all sorts. Also, let’s face it, a comfortable bed isn’t a sin to enjoy after a long day of cycling. And neither is a shower (as we both learned from our New Zealand experience).

To prepare for this, we’ve been contacting hosts in advance and making the necessary arrangements for each night. This will be a continuous work in progress throughout the tour, and an experience we’re both very much looking forward to!

After many orders and returns of last-minute bike parts, testing equipment, going through long to-do tasks, and making a complete mess of my parents living room, we’re excited to finally be on the move. “It’s fun to plan for it, but it’s even more fun to actually do it,” we decided. So, enjoy and stay tuned for stories from the road!

6 Responses to How to plan and pack for 4,000 miles in a bike saddle