Making your life a little easier

Our Airbnb host, Janet, from Boulder, CO made the most interesting analogy to electric bikes I’ve ever heard. “Electric bikes are kind of like childbirth,” she started the conversation and noted my perplexed, unresponsive expression. “Okay, okay, hear me out,” she said, sensing that I wasn’t about to contribute much useful feedback. “Well, women who give birth to a child want to do it the natural way, but sometimes it gets too hard or painful and they opt for painkillers…you know, to make their lives a little easier. Electric bikes are kind of the same. Sometimes biking gets too hard and tiring, and you want to give yourself a break and make the whole thing easier.”

I would have never made this connection if it wasn’t for Janet, and I suppose to some extent she’s right. Sometimes, even for the most hard-core bikers, biking gets tough – and what better way to make your cycling commitments more manageable than with an electric bicycle? During my intermission from cycling, I got a first-hand peek into Janet’s make-your-life easier analogy.

I went back to my home in Bellingham, when I was dealing with my injury, and spent much time discussing our trip and electric bikes with my friends. They had lots of questions and I did my best to describe the components, mechanics, etc. During one exchange of e-bike trivia at a potluck, a young man entered the room, overheard our conversation and addressed me, wide-eyed and enthused, “Are you talking about electric bikes? I just got one two weeks ago!”

His name is Dylan and he is a young, gregarious man who works at the local community bike shop. He is a true Bellinghampster (a local nickname) at heart: an environmentally conscious, local-food eating, croc-wearing biker. Bellingham is full of outdoor-loving, hard-core bicyclists and it would only be fair to group Dylan into this category. He’s not the spandex-wearing, race-til-you-drop type. He’s the 66-mile daily commute sort.

Dylan has never owned a car and always depended on biking for transportation. He used his road bicycle to complete his 33-mile one-way commute to Bellingham, until his girlfriend shared her concerns. “You’ve got no life left in you,” she’d say to him when he’d come home tired and lifeless after a full day of busy work at the bike shop and biking 66 miles on top of it. Not one to ignore his partner’s worries or his own body, he started looking into alternatives. He certainly wasn’t about to give up his pristine 7-acre property and wooden hut to move into town for a shorter commute. And then it hit him: the perfect solution. An electric bike!

He searched until he found the perfect model for his needs and he couldn’t be happier. “It’s amazing, I go up hills, carrying 60 pounds of cargo and giggling!” He is now able to haul everything he needs on his long trek home, including groceries, gear, and – to fit the ultimate Pacific Northwest stereotype – a few six-packs of micro-brew beer (to soothe the aching muscles of course). But the best part is that he’s able to come home with enough energy to do other things besides fall into a post-biking coma. 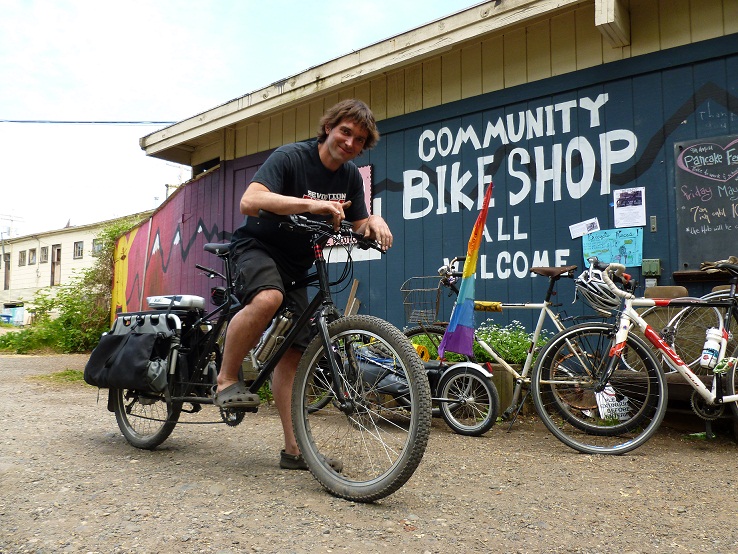 Dylan, in front of the Bellingham Community Bike Shop - The Hub

For Dylan, electric bikes are an innovative way to make long-distance commutes a viable cycling option, and to confirm Janet’s astute observation, make life easier. I don’t how much he would like to be grouped into an analogy about women giving birth, but he definitely admits that his life is more simple. I’m sure his girlfriend does too. 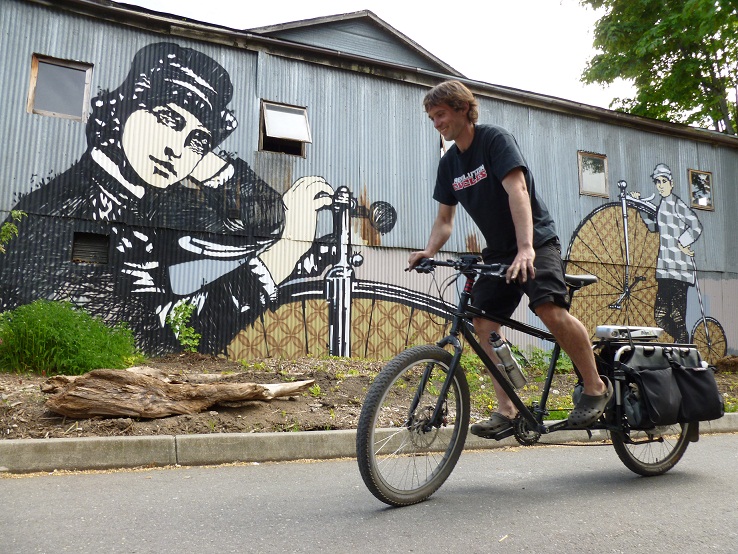 Dylan, thrilled about his new buy

Dylan is just one example. There are many others who want to commute or just plain ride a bike, but can’t because of long distances, hills, fitness levels, age, etc. The electric bike not only removes these barriers, but makes cycling easier for many people. So, whether you want to commute 66 miles to work or brave the hills leading to your house, but both prospects seem overwhelmingly difficult, an e-bike is the solution. 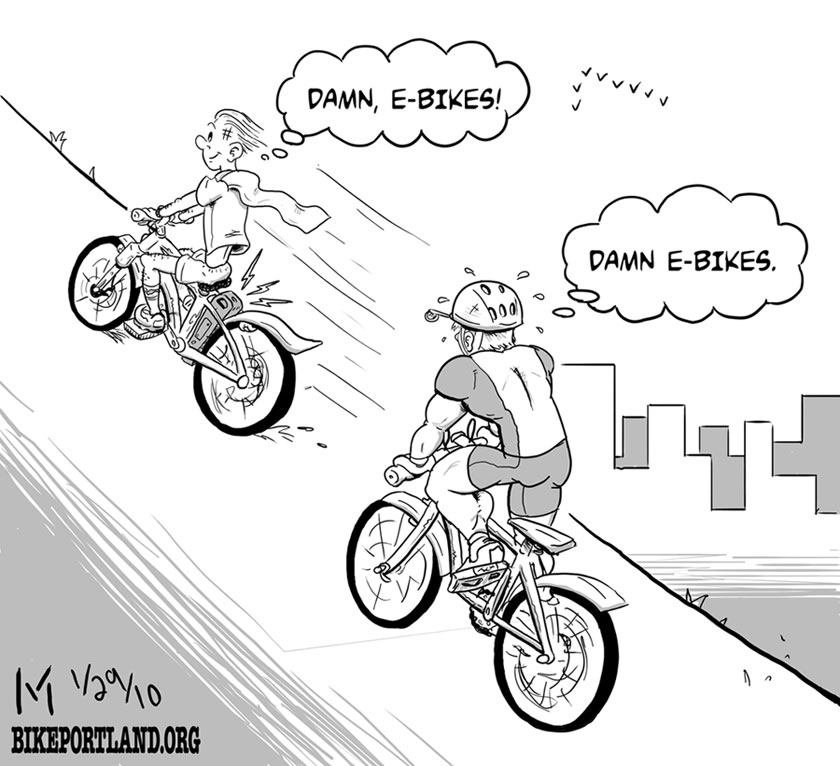 There you have it. Now you know that childbirth and electric bikes are more alike than you would have ever guessed.

2 Responses to Making your life a little easier