Before starting this trip, I couldn’t help but have flashbacks to our touring experience in New Zealand. In the winter of 2007 Boris and I went on a 1-month cycling trip around New Zealand’s South Island on traditional bikes. It was inspiring, beautiful and certainly challenging!

So, having had some bike travel experience as a reference, on the Trans-American tour I was anticipating muscles that were immediately sore, followed by unforgiving and steep hills — all compounded by the addition of fewer road shoulders and endless traffic.

I remembered us cycling at the speed of a whopping 4 mph up an incline in the heat of the day in New Zealand, and the passing vehicles honking at us to cheer us on. But I’ve realized in the last few days that this trip is — and will be — very different from our past experience. It took some time for us to really get it – we’re riding electric bicycles, which means that barriers like steep hills and headwinds are not altogether removed, but certainly made easier.

We hadn’t had an opportunity to tour or ride long distance on electric bikes prior to this journey. We’ve always commuted and recreated using traditional ones. But I must admit, when we were cycling towards West Chester, PA the other day against 40 mph headwinds, I wasn’t displeased about having an electric motor to give me a boost. Don’t get me wrong — we certainly put in our fair share of pedaling, and usually go to bed tired from the day’s ride. But I bet we’d be twice as tired, and twice as reluctant to wake up early each day, without the electric assist.

In every long-term travel trip you develop routines. On an electric bike trip, the routines are mostly consistent with what you would expect on a regular bike tour. However, in addition to our usual lodging, eating, water, picture and rest stops, we have a battery schedule. During the day, we stop to replace them with spares once they’ve run out of juice. In the evenings we scrounge around for electrical outlets to plug in our four, depleted 8-pound friends. In the morning, we prop them back on. Not a complicated process and an easily manageable one, but nevertheless, vital.

On a trip like this, there are additional anxieties about bike mechanics and breakdowns. For example, I started hearing a strange noise the other day while I was pedaling.

“Oh my god, it’s the motor,” was what came into my head as we stopped to examine the issue. A broken motor would be a troublesome predicament for one primary reason — we probably wouldn’t be able to fix it easily, so it would cause a delay.

Thankfully, it was just a loose kickstand. We both exhaled, tightened the offending item, and continued. The sound persisted. “Damn, it really is the motor.” But upon further inspection, we discovered that there was actually a giant nail protruding from my back tire and it was hitting the ground with each revolution. 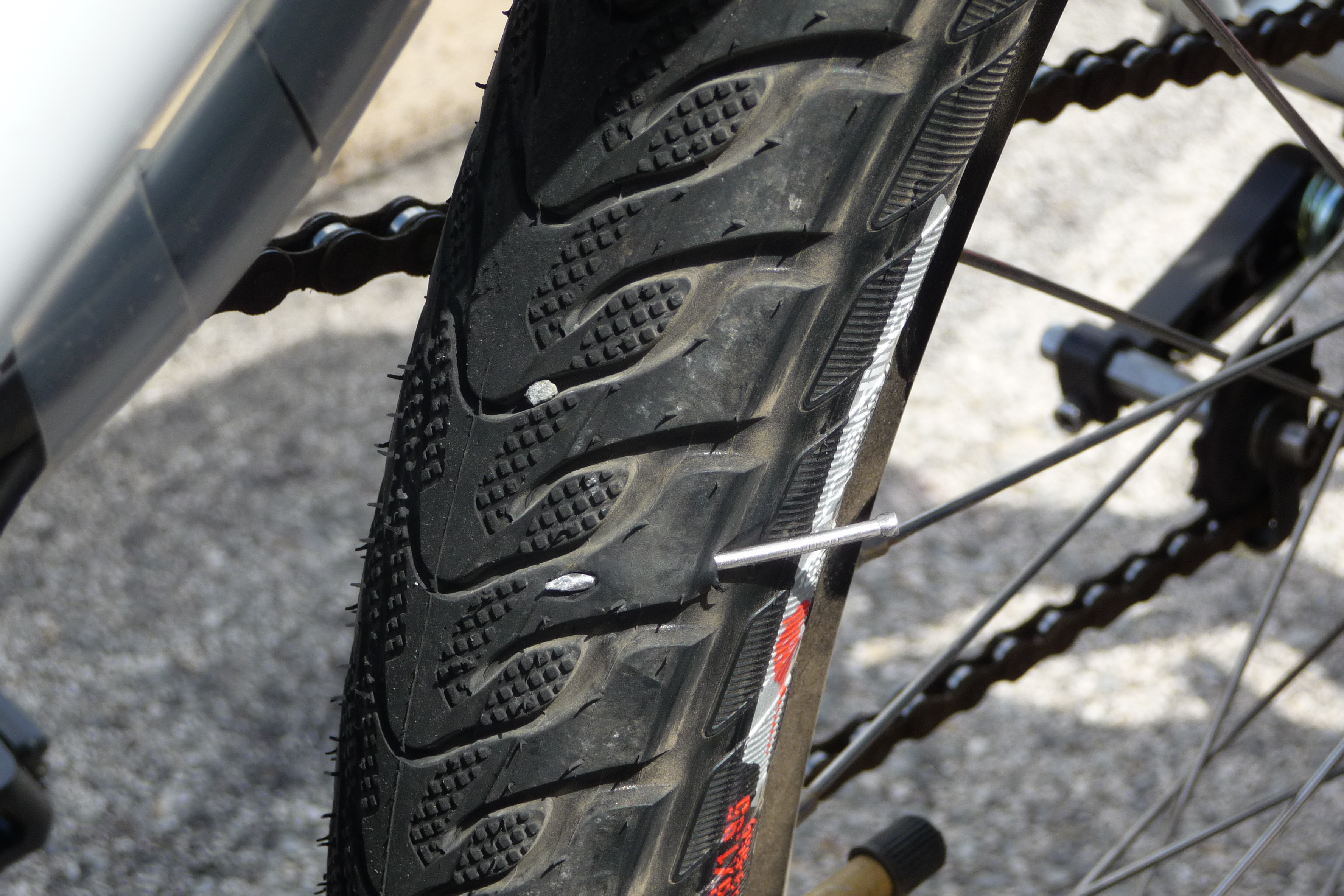 Two thoughts. One – glad we caught it in time! Two – thank you Jerald, the savvy, Brooklyn bike mechanic who told us to get thicker bike tires! If I remember, I’ll ship you a thank you basket of PBRs.

The Whole World’s A Stage (Apologies To Shakespeare)

I think bike tourers can’t help but attract attention. It’s inevitable really. You see someone hauling a giant trailer behind them or a bike with bulky panniers sticking out on four ends and you can’t help but stop and look.

Electric bikes add another degree of interest to onlookers. We still can’t gauge if all the head-turners understand what we’re biking on, but I think that some have an idea. For example, we got stopped by a plaid-wearing trout fisherman on the D&R Canal Trail. He was an old fellow, with a big heart to make up for some missing teeth.

“Where did you get them trailers from?” he asked us. He said he wanted to ride the trail and haul his fishing gadgets and daily catch using a bike trailer similar to ours. We explained. As he kept looking at our ride, he began to understood  the whole package. “Oh man, those are electric bikes! Oooh, I gotta get me one of those!” he said with some excitement, not shying away from showing his exuberance. 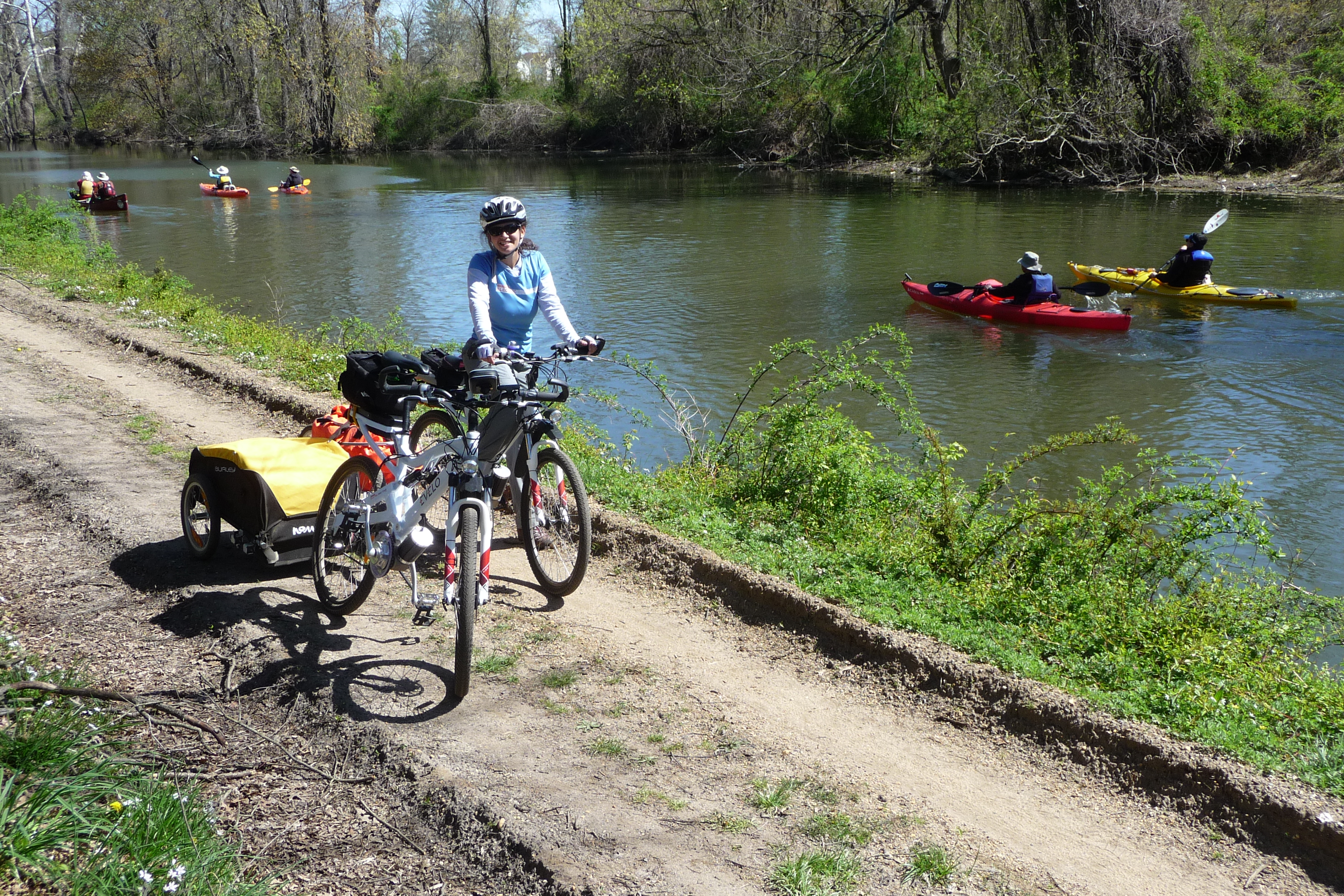 Anna on the D&R Canal Trail With Kayakers Aplenty

Some differences between traditional and electric bike touring are subtle, others are more stark. But the beauty of both is seeing the road from a low-speed lens and feeling the wind, the sunshine, and everything in-between. We’re off to a great start, and I hope our trip continues in the same fashion – with good weather, good people, minimally sore rears, and a healthy appetite!