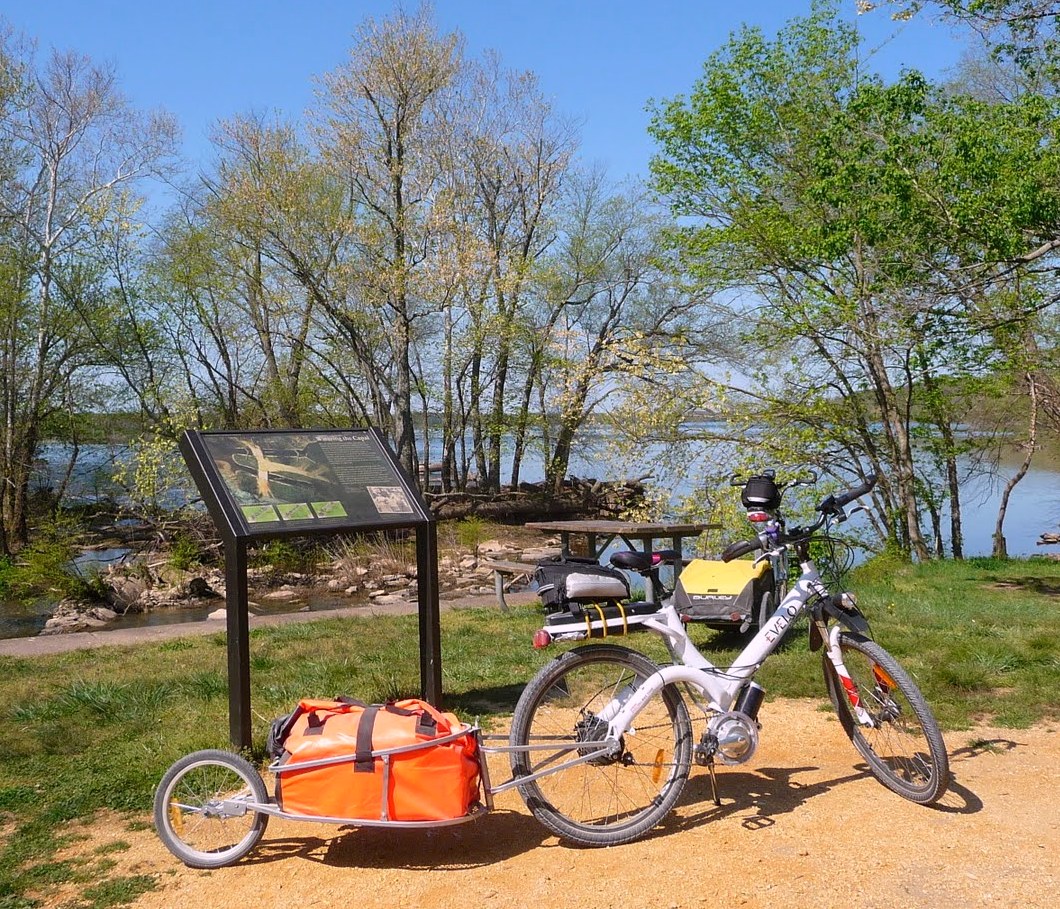 On a long stretch of unpaved trail, away from traffic and big cities, two bicyclists ride. With no one else for miles, the only sounds they hear are the whir of the wheels turning, an occasional snapping twig under a bike tire, or a whoosh of fallen leaves swept up by the momentum of their passage.

Spring weather has gifted the trail-side with flowering Trillium, fragrant wild leeks, and a healthy display of life that has been dormant for months.  Hawks circle the open expanse of water searching eagerly for fish. The occasional fly-fisherman wades into the meandering river, casting his fly rod with skill and precision.

This roughly 335-mile stretch is the combined route of two of the Northeast’s most impressive trail systems: the Chesapeake and Ohio (C&O) Canal Trail and the Great Allegheny Passage (GAP), creating a complete, off-road corridor from Washington, DC to Pittsburgh, PA — and our path for four days.

The C&O Canal — which starts in Washington — began as part of the dream for western expansion, with goals of connecting waterways from Georgetown to the Ohio River and expanding trade. Large boats were towed by mules up or down the river to transport goods and raw materials. Sadly, by the time construction was complete, canals were considered obsolete and advances in railroad technology prevailed. It was abandoned several decades later, but eventually restored into a beautiful hiking and biking trail.

The unpaved trail made progress a bit slow, as the trailers created a lot of drag every time we went over a rut or a hump. However, the scenery kept us in awe, with the canal to our right, the Potomac River on the left and dense forest on either side, so we didn’t mind the slow pace. 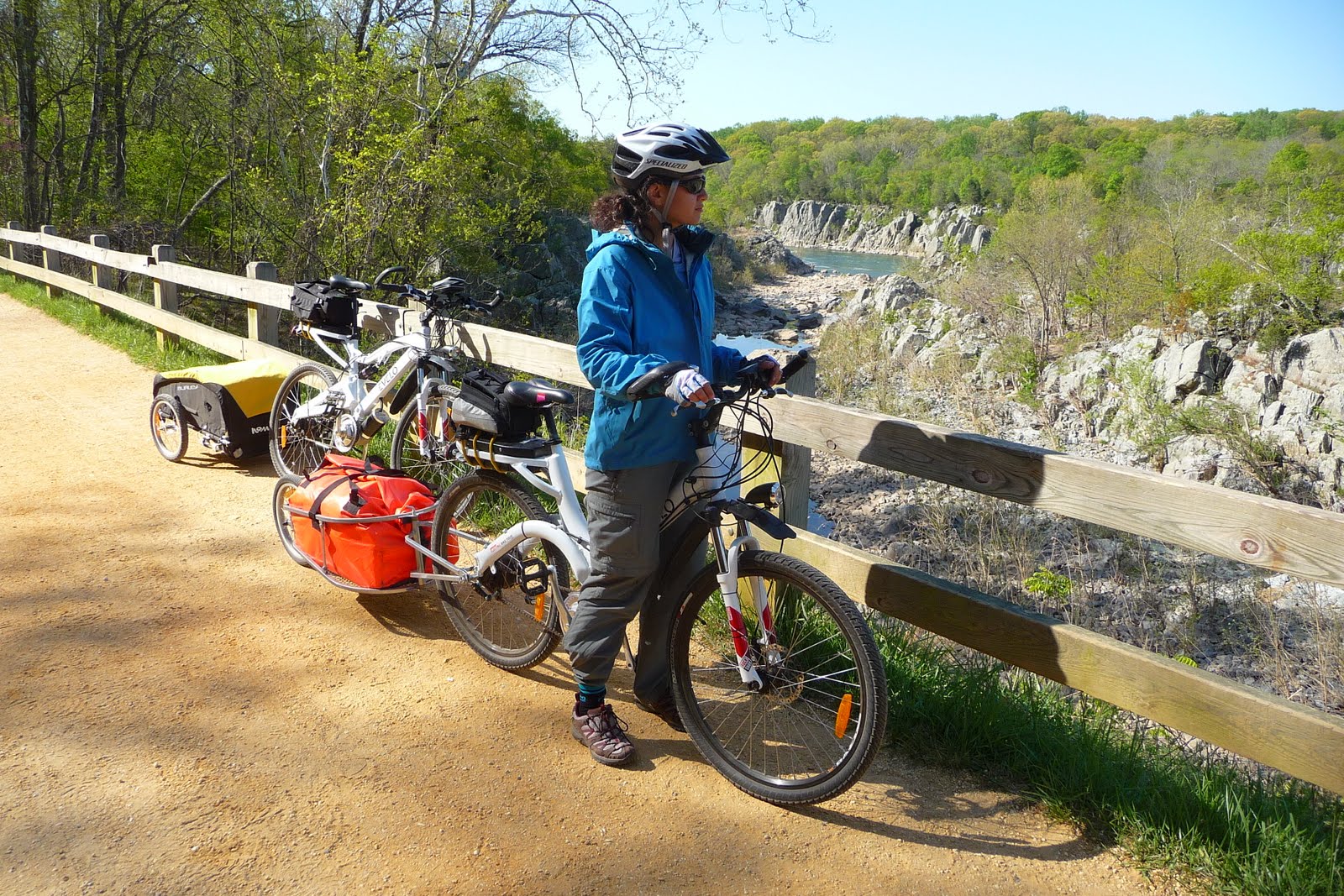 Enjoying the sunshine and admiring the scenery

But taking your eyes off the road to enjoy the sights could be problematic. Midway through the first day, Boris got a tad distracted after glancing at a GPS to check the mileage and steered his bike into a small rut in the road.

Within a split second, the bike wobbled to one side, then another, and went down, sending Boris over the handlebars and into an intimate face-to-dirt embrace. When I pedaled back I found the trailer upside down, Boris hunched over, but managing a grin wider than I thought was possible after such an acrobatic feat. 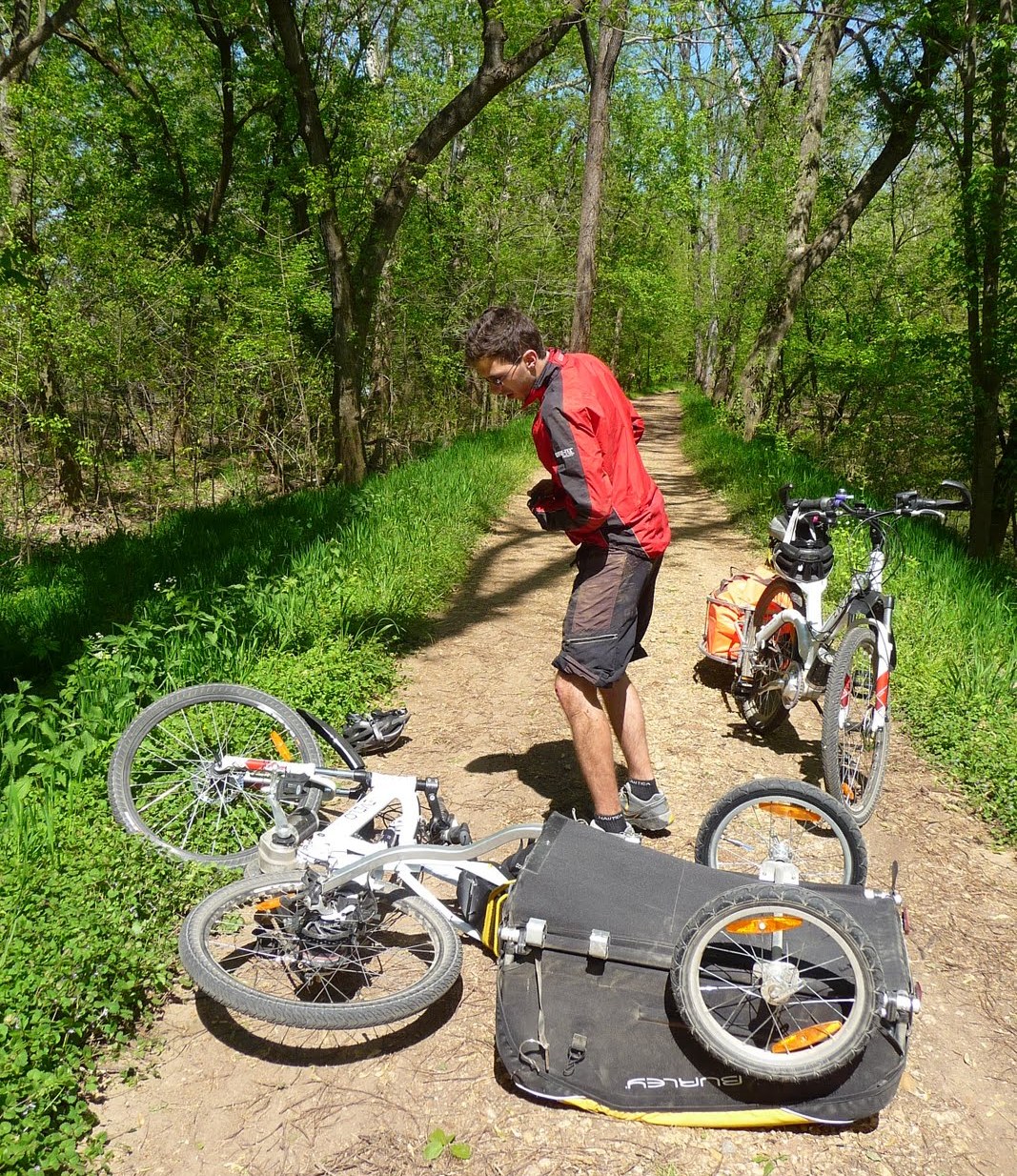 A minor accident on the C&O Trail

After a quick bandage, an adjustment to the bike, and a few shakes of the head we were back in good shape and on the road. With no more mishaps, we completed the C&O Canal Trail.

The GAP was a very different experience from the C&O. For one thing the road surface improved and became more even, which made our progress smoother and faster.

Much of the GAP is built on the abandoned grades of the Western Maryland Railway (WM) and the Pittsburgh and Lake Erie Railroad (P&LE). These lines originally served the coal, iron, and steel industries of the time. Though they’ve been converted to a trail, there are still many traces left from this bygone era — signposts, bridges and, best of all, tunnels.

When we rode through the half-mile long Savage Tunnel on the GAP, it felt like I was floating on a dark sea. “Keep going!” shouted Boris when he flew past me in the blackness, but I kept to my 7 mph speed, keeping things slow in case I got sucked up by the vacuum my imagination conjured up. We emerged unscathed and on to the next section of the trail. 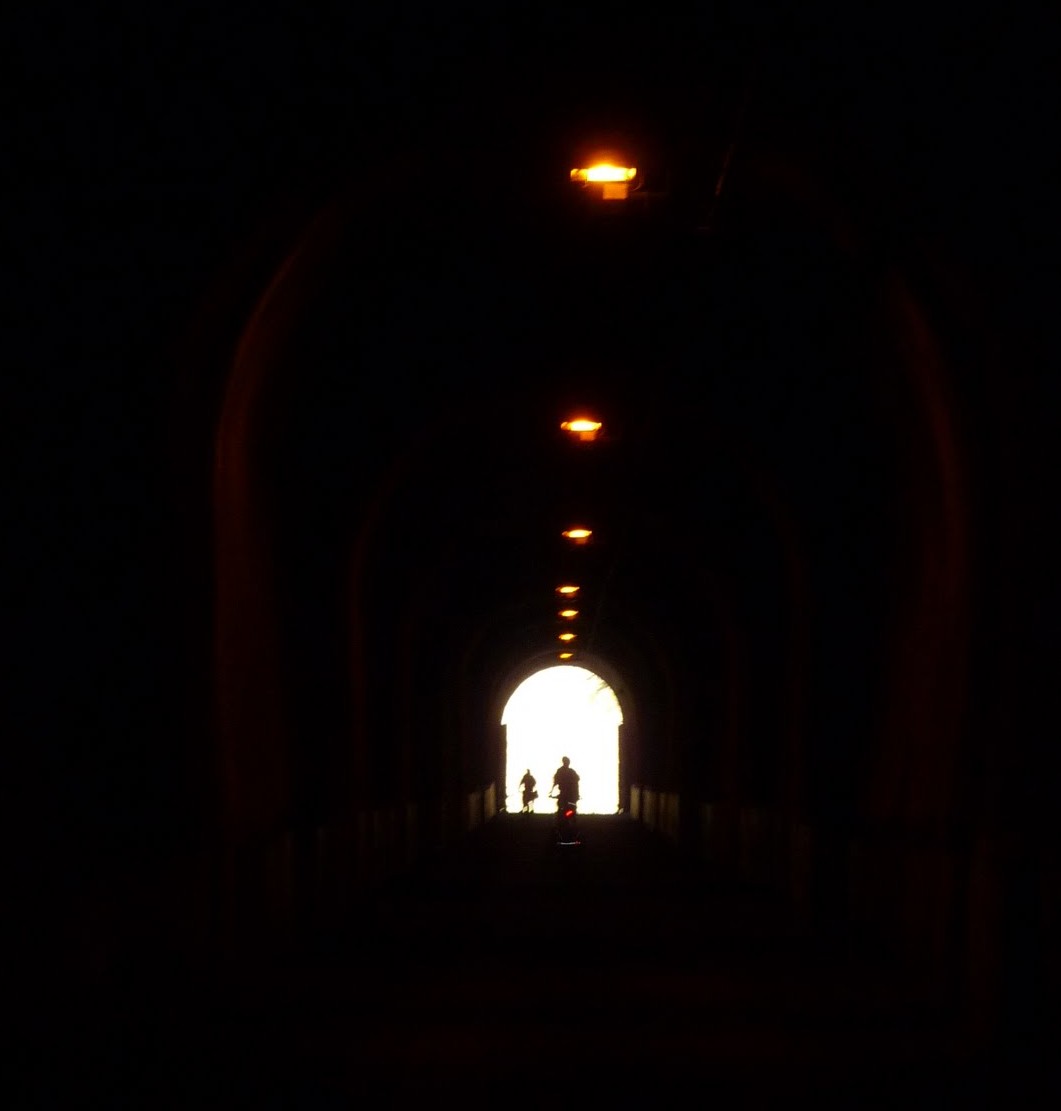 Biking through one of the GAP's old wind tunnels

The GAP trail has mile markers, which are both a blessing and a curse. It meant that I could ignore my odometer, but it also meant that when 5 o’clock rolled around and we still had 30 miles left to go, I couldn’t help but count each one. And believe me, the markers seem a lot further spaced when your rear end and your legs are begging for permission to stop working.

Boris broke into my reverie — “Sorry Anka, I know that all of us are a little tired today after the long day yesterday.” I looked around me. “All of us?” I said. “I think there’s just two.” “Hmmm,” said Boris, “Well I guess that makes the head count easier. One!” he exclaimed. “Two!” I followed.

And so we progressed into Pennsylvania until – 4 days later – we emerged in Pittsburgh! 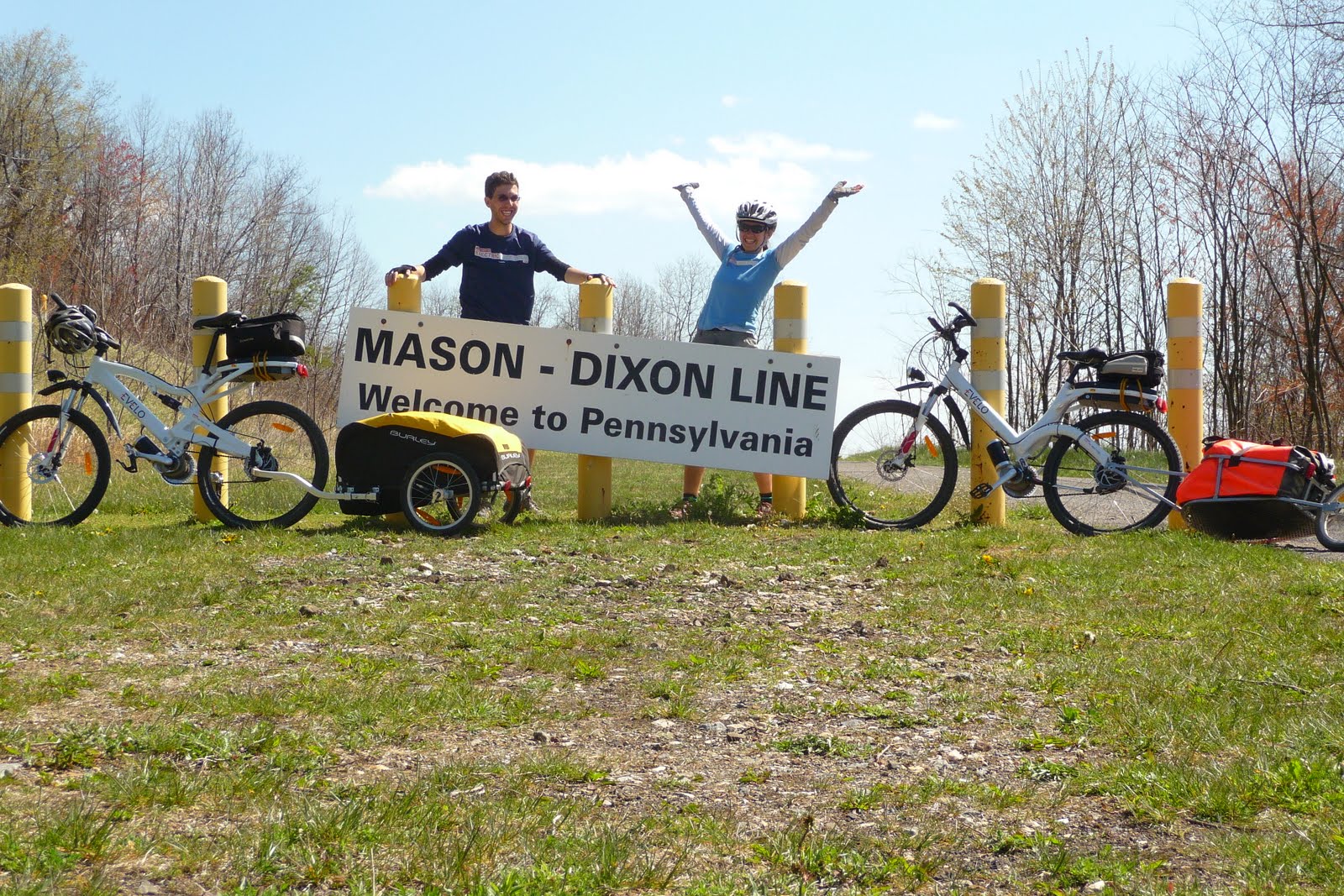 Sometimes we’d pedal for miles without seeing a soul. And then after a long, quiet stretch, a hiker or cyclist would casually pass us. No matter the location or the situation, we were always regarded with a pleasant “hello,” a smile, a wave of the hand, or a combination of all three. Grumpy people don’t seem to travel these grounds.

During our first day on the C&O we had stumbled upon a gregarious couple from Pittsburgh. We hit it off right away, especially upon discovering that they know someone also involved in the electric bike business. Four days later we shared our stories over gyro sandwiches in a cozy nook of South Pittsburgh, the day we finally finished pedaling the GAP. This is one of the best things about travel, we thought — those sometimes brief, but meaningful connections, which prove that friendships can sprout from the most unusual of places.

This 335 mile route remains a reminder of a bygone era of industry and expansion. Thousands of bicyclists and hikers enjoy its peace and have the opportunity to reflect on a period that changed the course of American history.

So, whether heading north to Pittsburgh, south to Washington DC, or covering a section that goes to nowhere in particular, you will always find something special here — history, cheerful faces, nature’s treasures, and most importantly (to quote the wise words of William O. Douglas), “a long stretch of quiet and peace.”

This trail is one of the longest continuous bike trails in North America. It is a rare find and an impressive accomplishment. It has gained so much popularity over the last decade that people travel specifically to this region to bicycle the whole route. It serves as inspiration in our country and in the world for establishing long networks of bike trails elsewhere. We hope that this model will gain more and more followers, and two-wheeled riders.